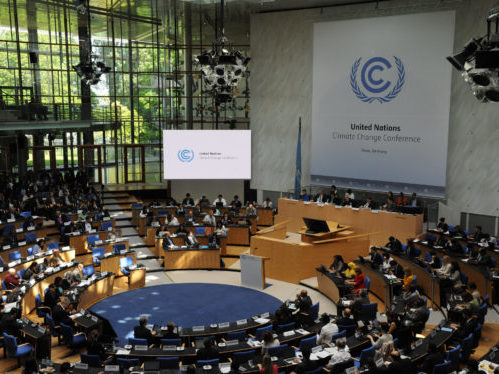 The United States is sending delegates to mid-year climate change negotiations in Bonn in May, despite the new administration’s fulminations about withdrawing from the Paris Agreement. After seeing Donald Trump appoint a climate denier to head the Environmental Protection Agency and a former ExxonMobil CEO as secretary of state, “UN officials told reporters in London on Thursday they were not sure how to interpret the move,” the Financial Times reports [subs req’d].

“We got an email saying there is a U.S. delegation coming in May,” said Nick Nuttall, communications coordinator at the UN climate secretariat. “It looked like it was a pretty standard delegation that they would send.” UN Climate Secretary Patricia Espinosa said she would be in Washington this week to meet senior officials with the new administration, “to really share with them why this agenda is so important and why it is in their interest.”

The Wall Street Journal, citing multiple sources, says Ivanka Trump and her husband Jared Kushner successfully lobbied her father to leave language critical of the Paris Agreement out of an upcoming executive order. That didn’t stop a group of 300 high-profile climate deniers from urging the former casino boss to withdraw completely from the UN Framework Convention on Climate Change, EcoWatch reports. With or without any reference to the Paris deal, the Washington Post has Trump launching the process to roll back a suite of Obama-era climate, energy, and environment regulations, including the Clean Power Plan.

“Trump’s executive order won’t, by itself, repeal the Clean Power Plan, which is a massive Environmental Protection Agency regulation that aims to reduce carbon dioxide emissions from existing power plants 32% below 2005 levels,” Vox notes. “Instead, Trump will ask his new EPA head, Scott Pruitt, to replace Obama’s rule with…something else.”

Trump reiterated his support for a renewable fuels standard, in a letter published during the National Ethanol Conference in San Diego. The letter meant “wading into the industry’s battle with independent oil refiners and billionaire Carl Icahn over whether parts of a federal mandate should be changed,” Think Bioenergy reports.

Meanwhile, an investigation by a Fox News affiliate in Oklahoma (yes, we read that twice, too) revealed that EPA chief Scott Pruitt “used a private email account to conduct official business while he was the state’s attorney general, directly contradicting what he told the Senate during his confirmation hearing,” ThinkProgress reports.

While the Capitol Hill coverage raised the mind-bending possibility of a parallel between Scott Pruitt and Hillary Clinton (couldn’t…not…point it out), the Federal Energy Regulatory Commission was instructing natural gas pipeline developers to disclose their potential climate impacts, the National Academy of Sciences was urging the new U.S. administration to maintain and expand federal climate research, the researchers behind that work were deeply worried about harassment and “McCarthyist attacks”, and the CBC was trying to decipher Donald Trump’s semi-coherent comments about the Keystone XL pipeline during his appearance at last week’s Conservative Political Action Conference. The stream of consciousness included a hypothetical conversation between an executive who might have been TransCanada CEO Russ Girling, and his wife.

“He gave up. A year ago, it was dead. Now he’s doing nothing, calling his wife, ‘Hello darling, I’m a little bored, you know that pipeline has killed us, has killed our company,'” Trump said. “Knock, knock, Mr. So and So, the Keystone pipeline sir, has just been approved.”