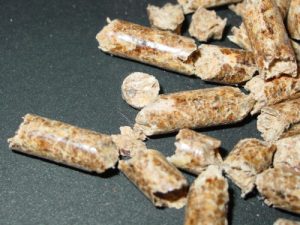 Converting wood pellets to electricity produces higher greenhouse gas emissions than coal, and related European subsidies for biomass fuel are in immediate need of review, according to a new study for Chatham House.

The biomass industry “rejected the report, saying that wood energy cuts carbon significantly compared to fossil fuels,” according to BBC.

The debate is important, because wood pellets supply about 65% of Europe’s green energy. “EU governments, under pressure to meet tough carbon-cutting targets, have been encouraging electricity producers to use more of this form of energy by providing substantial subsidies for biomass burning,” explains BBC environmental correspondent Matt McGrath. But “current regulations do not count the emissions from the burning of wood at all, assuming that they are balanced by the planting of new trees,” he adds, citing the Chatham House assessment.

“The fact that forests have grown over the previous 20 or 100 years means they are storing large amounts of carbon,” said report author Duncan Brack, a former special advisor at the UK Department of Energy and Climate Change. “You can’t pretend it doesn’t make an impact on the atmosphere if you cut them down and burn them.”

The assumption that bioenergy is carbon-neutral “misses out on some crucial issues, including the fact that young trees planted as replacements absorb and store less carbon than the ones that have been burned,” BBC adds, citing Brack. “Another major problem is that under UN climate rules, emissions from trees are only counted when they are harvested.”

Since Canada, the U.S., and Russia use a different method to account for carbon in the wood pellets they export to Europe, and the EU skips emissions from burning, “the carbon simply goes ‘missing,’” McGrath notes. The UK imported 7.5 million tonnes of pellets from Canada and the U.S. in 2015-16.

“This report confirms once again that cutting down trees and burning them as wood pellets in power plants is a disaster for climate policy, not a solution,” said David Carr, General Counsel of the U.S. Southern Environmental Law Center. “The process takes the carbon stored in the forest and puts it directly into the atmosphere via the smokestack at a time when carbon pollution reductions are sorely needed.”

“They are shooting themselves in the foot,” agreed Linde Zuidema of Fern, an environmental group based in Brussels. “They are not taking into account that increased harvesting of trees will actually have an impact on the role that forests play as a carbon sink.”

Dr. Nina Skorupska, CEO of the UK Renewable Energy Association, said the bioenergy supply chain cuts emissions 60 to 80% compared to fossil fuels. “That principle is at the heart of the industry,” she told BBC. “Biomass cuts carbon, supports forests, and delivers reliable renewable energy at a lower cost.”

Brack also took issue with the Intergovernmental Panel on Climate Change’s growing emphasis on bioenergy with carbon capture and storage (BECCS). “It’s really worrying,” he said. “The number of scenarios that the IPCC reviewed that rely on BECCS for ambitious climate change targets, it’s crazy.”

In 2014, The Tyee ran a feature series on biomass that raised similar concerns about its climate and other environmental impacts. While one state-of-the-art demonstration plant at the University of British Columbia was running very cleanly, “that achievement is likely exceptional,” wrote Robert McClure, executive director of the non-profit InvestigateWest.

“In the United States, a Wall Street Journal review of 107 biomass-fueled power plants found that 79% had been cited in the previous five years for violating air or water pollution standards,” he wrote. “Prompted by health concerns, the American Lung Association, Massachusetts Medical Society, and Florida Medical Association have all come out against large-scale wood-burning to produce energy.”