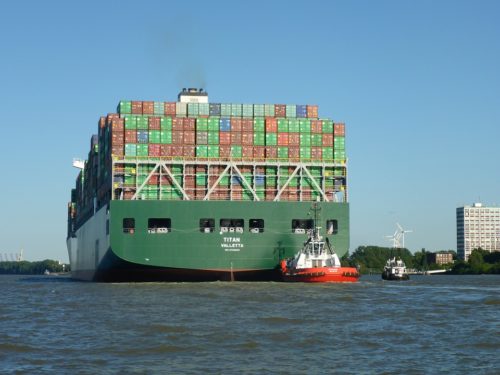 The maritime shipping industry is under the gun in Europe, where legislators have “lost patience” with its inaction on climate change and are now proposing to include the industry in the continent’s Emissions Trading System (ETS).

The EU has given the International Maritime Organization until 2023 to come up with its own emission controls, after decades of delays. If the IMO continues postponing action, the ETS provision will take effect.

“Ship owners are furious, claiming it is wrong that they will effectively be charged for carbon pollution in European Union waters ahead of any wider international arrangement,” Climate News Network reports. But that hasn’t stopped members of the European Parliament from endorsing a environment committee recommendation that shipping be included in the ETS’ carbon cap-and-trade system.

Maritime shipping produces about a gigatonne of carbon per year, accounting for 2.5% of global greenhouse gas emissions, and its output is on track to increase 50 to 250% by mid-century.

That projection “is not compatible with the internationally-agreed goal of keeping global temperature increase to below 2°C compared to pre-industrial levels, which requires worldwide emissions to be at least halved from 1990 levels by 2050,” the European Commission stated.

Ports and cargo owners supported the EU initiative, Brussels-based Transport & Environment reports. The International Chamber of Shipping’s director of policy and external relations, Simon Bennett, complained that “this vote for a unilateral, regional measure simply risks polarizing debate among IMO Member States, which have already agreed to develop a strategy for reducing shipping’s CO2 emissions” consistent with the 2015 Paris Agreement.

But T & E Aviation and Shipping Policy Director Bill Hemmings pointed to the IMO’s “bad track record of failing to act quickly”—dating back as far as the 1997 Kyoto Protocol, Climate News Net notes.

“This cross-party [European Parliament] proposal will end the anomaly of shipping being the only sector in Europe not contributing to the 2030 emissions reduction targets,” Hemmings said. “EU governments must follow Parliament’s lead and agree that ship CO2 emissions must go in the EU ETS if the IMO does not act. The benefits to our climate through less warming and to our industry and economy through lower fuel costs cannot be ignored.”