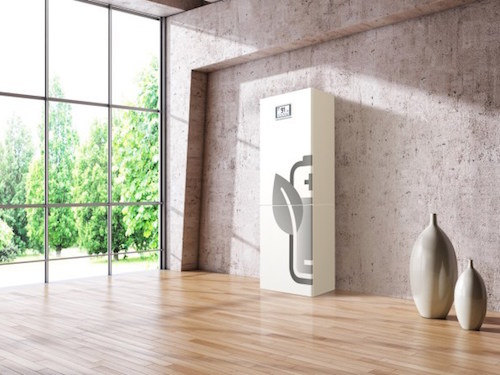 A competitive market for residential and commercial storage batteries is heating up, with German manufacturer Sonnen GmbH planning a major expansion in Atlanta while Tesla Inc. and UK start-up Powervault Ltd. fight it out in the UK market.

“Sonnen has installed more than 16,000 storage systems worldwide, mostly in Germany,” Bloomberg reports, in a post picked up by Renewable Energy World. “With demand for residential storage growing, it sees the U.S. as its next big opportunity. Its product helps solar homes use more of the energy the panels produce and can also provide backup power during blackouts.”

Sonnen had previously contracted with a San José company to manufacture its lithium ion batteries, which use iron phosphate in their chemistry and come in at a weight that is suitable for stationary applications, but not for electric vehicles. Now, Sonnen will combine research and manufacturing at its Atlanta plant.

“We want to control our product entirely, as we do in Germany,” said the company’s North American lead, Blake Richetta. “The U.S. market is in its infancy. We have the largest installed residential base, and it’s still tiny.”

In the UK, meanwhile, Powervault is ramping up production of its lead-acid and lithium-ion batteries in the hope of selling 50,000 home backup units in 2020, compared to 1,000 this year.

“We have a huge market to go after in the UK,” said Managing Director Joe Warren, in another Bloomberg post on REWorld. “The key market right now is people with solar on their rooftops,” but “the smart meter rollout will make people much more aware of their energy consumption. We’re expecting people to take a much more active stance.”