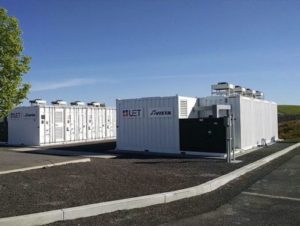 Morgan Stanley declared the growth in large-scale battery electric storage “underappreciated” in a report. But that appreciation may be coming, as Bloomberg writes that several deep-pocketed financial houses are taking the sector more seriously.

Both organizations agree that plummeting costs are pushing grid-scale battery storage banks into their own to backfill the electrical grid during lulls in renewable energy production, or for instantaneous load-balancing that was previously handled by so-called “peaking”, plants typically fueled by natural gas.

Citing Morgan Stanley, Greentech Media reports that “the U.S. addressable market for energy storage” is potentially worth about US$30 billion, “without significant regulatory change.” Were the Federal Energy Regulatory Commission to make it easier to trade storage, that market could grow by 70%.

“That’s bad news for companies with lots of natural gas generation in markets favourable to storage,” Greentech observes, “but good news for Tesla and LG Chem, which the analysts predict will control the industry.”

A “key obstacle” to that optimistic growth track, however, has been “a lack of access to capital for investment and project financing,” observes staff writer Julian Spector. “Most banks have been leery of putting their balance sheets behind newly-developed chemistries from companies that have only existed for a decade or less.”

But that may be changing, Bloomberg reports. In what it calls “a coming-of-age moment for the fledgling industry,” large commercial lenders “including Investec Plc, Mitsubishi UFJ Financial Group Inc., and Prudential Financial Inc. are looking to finance large-scale energy storage projects from California to Germany.”

It doesn’t hurt one bit that “battery costs have declined 40% since 2014, and regulators are mandating storage technology be added to the grid,” Bloomberg notes. “That’s encouraging utilities to offer longer contracts, and developers are expected [to] build $2.5 billion in systems globally this year.”

In turn, “these trends are changing the risk profile, giving lenders confidence in batteries in much the same way that power purchase agreements opened banks’ doors years ago for wind and solar power.”

The longer-term financial commitments alleviate pressure on battery facility developers, whose costs are typically almost all on the front end. Bloomberg anticipates large-scale storage installation will increase 15-fold by 2024.