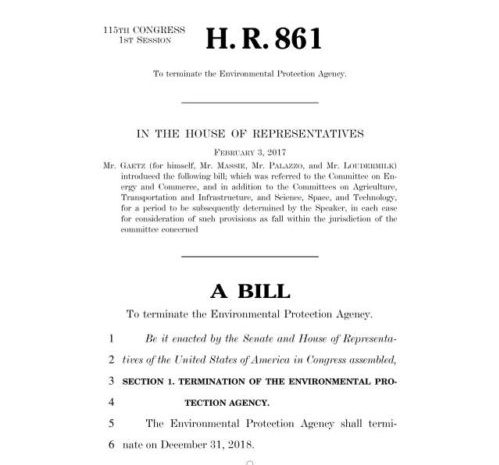 The measure prompted the Natural Resources Defense Council to publish an exposé last week on what the U.S. would look like without the EPA.

“Since the EPA’s founding in 1970, concentrations of common air pollutants, like sulphur dioxide, have dropped as much as 67%,” writes environmental journalist Brian Palmer. “The EPA helped mitigate catastrophes like acid rain, leaded gasoline, and DDT. The agency bravely classified second-hand smoke as a known carcinogen in 1993, paving the way for successful litigation against the tobacco industry and an incredible reduction in U.S. smoking rates.”

Palmer speculates the EPA may have been too successful for its own good. “In the same way that vaccines have given parents the luxury of forgetting what measles and whooping cough were like, the EPA has nearly wiped out the national memory of the contaminated environment of the 1960s. But things were so bad then that support for creating the agency and our major environmental statutes was virtually unanimous—nearly everyone recognized the need for an environmental regulator.”

That’s how Republican President Richard Nixon, who founded the EPA, could state that “restoring nature to its natural state is a cause beyond party and beyond factions” in his 1970 State of the Union address.

While Congress considers abolishing the agency entirely, Acting Administrator Catherine McCabe told staff the Trump administration’s federal hiring freeze was “already creating some challenges to our ability to get the agency’s work done.” Agency officials were also on notice that a new series of White House executive orders would likely be signed once ex-Oklahoma attorney general Scott Pruitt was sworn in as administrator—in spite of his recent statement that a U.S. senator’s concern about climate change “is just a religious belief for him and for others”.

The U.S. Senate rushed Pruitt’s confirmation through a vote last week, ahead of a court-imposed deadline to release thousands of emails “related to his ties to major energy interests who may have donated to his political causes,” EcoWatch reported. So far, Pruitt has only released 411 of an estimated 3,000 messages, making it impossible for senators to assess possible conflicts of interest before the vote. (At press time, we were anxiously waiting for Breitbart or InfoWars to declare a conspiracy over the missing emails. Waiting, but not holding our breath.)

Meanwhile, CleanTechnica and ProPublica were out with profiles of Princeton physicist William Happer, likely to be named as Trump’s top climate advisor. “Is he a raving lunatic?” CleanTechnica asks. “Listen to what he has to say and judge for yourself.” Happer is a climate denier, and also supports limiting federal scientists’ ability to share their findings with the public.

“There’s a whole area of climate so-called science that is really more like a cult,” he told The Guardian. “It’s like Hare Krishna or something like that. They’re glassy-eyed and they chant. It will potentially harm the image of all science.”

On ProPublica, Happer told veteran environment reporter Andy Revkin that being called a climate denier feels like being labelled a Nazi sympathizer. In his introduction to a detailed Q&A, Revkin reports that “even among foes of curbs on greenhouse gases, Happer is an outlier, insisting the benefits of more carbon dioxide will outweigh any harms.”

Another Trump appointee, now returning to the EPA as a member of the administration’s “beachhead team” after working at the agency, is David Schnare, who spent 33 years as an EPA enforcement lawyer while devoting his free time to fighting its work. “During his tenure at the EPA, Schnare simultaneously directed a conservative think tank’s environmental program that opposed regulation as a pollution remedy,” InsideClimate News reports. “He testified to Congress that carbon regulations do greater harm to the environment than carbon dioxide. He also co-founded a legal organization funded partly by fossil fuel interests, and through that group launched an effort to make public climate scientists’ private emails to call their work into question.”

“The bottom line is he has been a virulent EPA critic who has worked to block health protections saving many tens of thousands of lives a year,” said John Walke, director of NRDC’s clean air program.