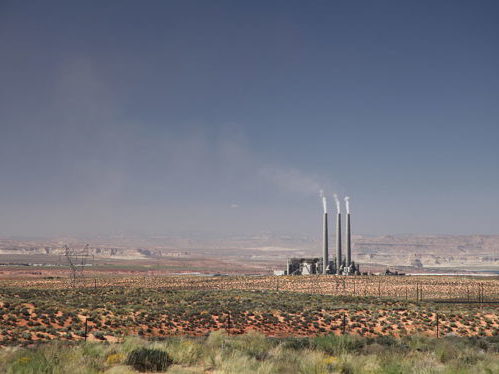 Low natural gas prices seem destined to dash ex-casino mogul Donald Trump’s bid to resurrect coal industry jobs during his new gig in the Oval Office, after the owners of the country’s third-largest coal plant announced it would be shutting down decades ahead of schedule.

And the now-imminent closure of the 2,250-MW Navajo Generating Station (NGS) outside Page, Arizona “likely blows a hole” in the bankruptcy restructuring plan put forward by coal giant Peabody Energy, the Institute for Energy Economics and Financial Analysis reports.

Navajo is the biggest remaining coal plant in the western U.S., and one of two to be shuttered in the last three weeks.

But coal plant operators apparently live in the real world.

“The utility owners do not make this decision lightly,” said Mike Hummel, deputy general manager responsible for the Navajo plant. “NGS and its employees are one reason why this region, the state of Arizona, and the Phoenix metropolitan area have been able to grow and thrive,” he said. But the plant operator has “an obligation to provide low-cost service to our more than one million customers, and the higher cost of operating NGS would be borne by our customers.”

Navajo will close at the end of 2019. And less than three weeks ago in Ohio, Dayton Power and Light closed a deal with Sierra Club to shut down its 2,440-MW Stuart coal plant and its 666-MW Killen facility in June 2018. The company will build at least 300 MW of solar and wind capacity by 2022 and fund “a variety of energy efficiency steps and grid improvements,” the Post states.

IEEFA says Peabody can’t afford to lose its sales to the Navajo plant if it hopes to meet the financial targets in its restructuring plan.

“Peabody naturally wants the plant to stay open,” writes Finance Director Tom Sanzillo. But “far from being the economic engine that Peabody proclaims, the plant actually is a drag on the local economies of its various owners, which have a responsibility to provide the most affordable electricity possible. Navajo Generation Station cannot meet this test in large measure because the coal it buys from Peabody costs too much.”

Overall, Sanzillo calculates that the cost pressures at plants like Navajo translate into a US$50- to $90-million gap in Peabody’s financial performance (EBITDA) target for 2019. “This damage could begin to take its toll within a year of the company’s planned exit from bankruptcy. Truth is—these announcements aside—the bankruptcy plan had material defects already.”

In an unusual twist on the usual relationship between First Peoples and fossil energy development, IEEFA carried a report that the Navajo Nation is calling on Trump to stop the shutdown. The community is home to the coal plant and the mine that feeds it, and stands to lose 800 jobs from the closure. Navajo Nation Chair Russell Begaye said he would “seek a solution based on what we feel needs to be done,” including “tax breaks, subsidies, a real strong verbiage from the White House, from President Trump himself.”

But the Wall Street Journal, the source of the IEEFA report, cautions that “if Mr. Trump follows through on campaign pledges to support coal mines and plants, he would be fighting against a market reality. An abundance of low-cost natural gas, a fuel that competes directly with coal to generate electricity, has caused permanent shifts in the U.S.”