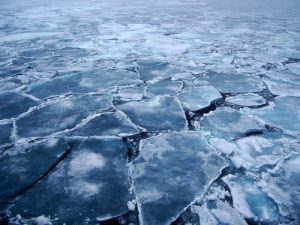 Faced with what looks increasingly like a death spiral for the Arctic polar ice cap, a group of U.S. sunbelt scientists has a proposal. It involves millions of pumps and half a trillion U.S. dollars. But hear them out.

Freakily warm temperatures at least 20ºC above normal have left sea ice in the Arctic Ocean at its smallest extent in the 38 years of satellite record, the U.S. National Snow and Ice Data Center (NSIDC), in Boulder, CO reported last week. The ice extent is a quarter of a million square kilometres less than in January last year, which was itself a record low. Last month, in mid-winter, the ice actually retreated in several places.

Physicist Steven Desch has an answer, sort of. With colleagues at Arizona State University, he wants to deploy 10 million wind-powered pumps over the Arctic ice cap. They wouldn’t expand the ice cap’s extent, exactly. But they might make the part of the ocean that freezes every winter stay that way longer.

The idea is that, during the Arctic winter, the millions of pumps would draw water from under the ice to the surface, where it would freeze and thicken the cap.

Although the shrunken extent of sea ice has grabbed most of the attention, scientists fret nearly as much at the loss of thick, multi-year ice that resists summer melting. “The current cap rarely exceeds two to three metres in thickness, and is being eroded constantly as the planet succumbs to climate change,” the Guardian explains. “The pumps could add an extra metre of sea ice to the Arctic’s current layer, Desch argues.”

The loss of Arctic ice cover, the Guardian warns, “would disrupt life in the region, endanger many of its species, from Arctic cod to polar bears, and destroy a pristine habitat. It would also trigger further warming of the planet, disrupt weather patterns across the northern hemisphere, and melt permafrost, releasing more carbon gases into the atmosphere.”