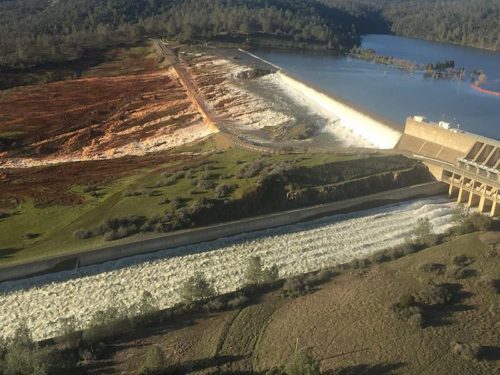 A relatively rare risk of large-scale hydroelectric generation forced nearly 200,000 people north of Sacramento, CA from their homes over the weekend, as tons of water being spilled from the United States’ tallest dam eroded spillways and threatened their integrity.

The evacuees were permitted to return home late yesterday. “But now, a fresh worry,” the Washington Post reports. “As families began going home to a place that just days before was under threat of catastrophic flooding, they were suddenly unsure whether the infrastructure that nearly failed will continue to hold back a trillion gallons of water.”

An evacuation was ordered in the town of Oroville at 4:45 in Sunday afternoon, after authorities determined that both the Oroville Dam’s primary and emergency spillway had been damaged by the enormous volume of water being released to relieve pressure on the main dam structure.

Dam operators had begun draining water down the seldom-used backup spillway on Thursday when erosion opened a hole in the reservoir’s main spillway. “We determined we could not fix the hole,” Bill Croyle, acting director of the state’s Department of Water Resources, told reporters late Sunday. “Once we have damage to a structure like that, it’s catastrophic. You don’t just throw a little bit of rock in it.”

But then, the rushing water opened a large hole in the emergency spillway, as well, which threatened to take out more of the reservoir’s concrete containment. “Its collapse would have sent a ‘30-foot wall of water’ crashing out of the lake reservoir,” The Atlantic reported. At that point, authorities ordered the last-minute evacuation downstream, and redirected some of the water being spilled back to the damaged main spillway.

By late Sunday night, flows down the spillways had been reduced, but evacuees had yet to be told when they could go home. At no point, officials underscored, was the main dam itself compromised. However, the damaged spillways will soon be tested again. The state expects additional rainstorms will add to the coming springtime flow of melted snow from the high sierras.

In 2005, the outlet reports, “three environmental organizations—the Friends of the River, the South Yuba Citizens League, and the Sierra Club—warned federal officials that the earthen emergency spillway wasn’t capable of handling extreme flooding. But on the recommendation of state officials who balked at the cost of paving the emergency spillway, the feds tabled the matter.”

One of humanity’s oldest ways of storing renewable energy, dams to create reservoirs for hydroelectric generation or other purposes are prone to a number of downsides. Research last year found that reservoirs generate more greenhouse gases than previously calculated. Tree clearing for the 824-megawatt Muskrat Falls hydro reservoir in Newfoundland and Labrador is likely to release a pulse of toxins, including mercury, downstream. And last October, North Carolina experienced a brush with the same threat as Oroville, when heavy rain in the wake of Hurricane Matthew threatened for a time to breach a 1.2-billion-gallon coal ash pond at a retired thermal power station.

“The dam crisis has a number of implications,” blogs Ethan Elkind, an attorney who directs the climate program at the Center for Law, Energy and the Environment at UC Berkeley. “It reminds us once again that U.S. infrastructure is badly in need of repair and replace. The big wave of projects following World War II are now reaching the end of their useful lives, as the dam now symbolizes.”

As seriously for the future role of lower-carbon hydro energy, Elkind suggested, a “dam failure could undermine the case for more dam projects going forward. What Fukushima did to nuclear power could now be happening to dams.”

Back in Oroville, more rain was forecast for as early as Wednesday and through Sunday, according to the National Weather Service.”