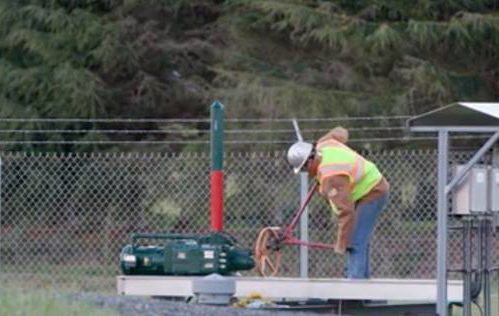 A jury in Skagit County, Washington weighed evidence on climate risk and failed to reach a verdict for or against Ken Ward, founder of the Climate Disobedience Center, who faced up to 30 years in prison for disrupting a pipeline carrying Alberta tar sands/oil sands bitumen last October.

Ward reported the verdict on EcoWatch just days after the Wall Street Journal commented on U.S. pipeliners’ “struggle to contend” with a “populist uprising” against new fossil infrastructure.

Ward was one of a group activists who sent shudders through the pipeline industry last fall when they temporarily shut down five Canada-U.S. pipelines in solidarity with the Standing Rock Sioux and their allies against the Dakota Access Pipeline. When Ward’s trial began early this month, he received a supportive tweet from U.S. activist Robert F. Kennedy Jr.

“The trial itself was very short, barely two days long, because there was no disagreement on the facts of the case,” Ward writes, “because my proposed necessity defence was not allowed by order of the presiding judge (so our expert witnesses on climate science and energy policy did not take the stand), and because my own testimony was sharply limited in scope.”

But Ward still presented testimony, charts, and graphs on the speed and severity of climate change, the “potentially catastrophic impact of sea level rise on Skagit County”, the “culpable role of tar sands oil” in the climate crisis, the scale of change needed, and the “powerful, effective, and unique role that non-violent climate direct action can play in forcing change in a deadlocked society.”

In the end, Ward says court-imposed limits on his testimony pointed to the value of keeping climate messaging as simple and succinct as possible.

“For some time, I have argued that emphasizing the complexity of climate science does us no service in a public debate where our opponents ridicule and warp scientific approaches, and where even climate activists are befuddled by the complexity of the problem,” he writes. “In my defence, truncated as it was, I was able to present the barest minimum of information outlining and supporting the simplest and direst aspect of the climate emergency: catastrophic sea level rise, and why my action can be considered appropriate in the circumstances.”

And it worked. “For some number of the Skagit County jury, this limited data set on climate change impacts proved more persuasive that the graphic depiction of my actions,” presented by the prosecution in video form.

Ward’s success—at least until prosecutors decide whether to refile charges—was just one part of a bigger movement that the Wall Street Journal casts as “a sobering reality”, one that is “tempering the industry’s excitement over President Donald Trump’s moves” to restart the intensely controversial Keystone XL and Dakota Access pipeline projects.

“Even as they cheer the removal of former President Barack Obama’s regulatory roadblocks, executives at some of the largest U.S. pipeline companies say the industry is struggling with how to confront a potentially bigger obstacle: the reinvigorated protest movement,” the Journal states, in a post picked up by the Institute for Energy Economics and Financial Analysis.