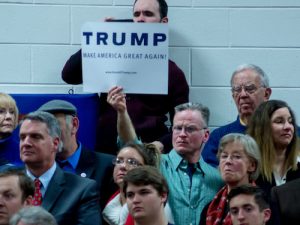 Donald Trump has reportedly had a frustrating, angry first three weeks in the world’s most powerful political office. (Oh, stop gloating…actually, on second thought, go right ahead.) Now, it turns out his own voters stand against some of his more outlandish positions on climate change and international diplomacy.

The analysis comes for the Center for Climate Change Communication at George Mason University, based on a post-election survey that tracked voters’ views on climate and clean energy. It determined that 49% of Trump voters believe global warming is happening, against only 30% who don’t. 47% think the U.S. should participate in the Paris Agreement, against 28% who don’t. And 62% support some form of carbon price, compared to only 21% who don’t.

But before he reconnects with his own base, Trump might want to look at who’s echoing his own catch-phrase. “We’ll see you in court” was the word from the youth plaintiffs behind Juliana v. United States, the case where Our Children’s Trust has standing to sue the U.S. government, the State of Washington, and the United States president for failing to protect future generations from the impacts of climate change. Until now, President Barack Obama was a named defendant in the case. Late last week, Our Children’s Trust updated the suit to list Trump instead.

The controversy swirling around Trump’s nominee for Environmental Protection Agency administrator, Scott Pruitt, shows no sign of dissipating, with climate scientist Scott Weaver calling out the “alternative facts” and “subterfuge” in the ex-Oklahoma attorney general’s Senate testimony. The Hill reports that Congressional Republicans are preparing legislation to “gut” the EPA, eliminating major programs on greenhouse gas emissions, environmental justice, and ground-level ozone and closing all the agency’s regional offices. Rep. Sam Johnson (R-TX) called it good stewardship of taxpayers’ dollars. The Hill said the bill was based on a model from the arch-conservative Heritage Foundation.

ClimateWire, meanwhile, reports [subs req’d] Pruitt’s own position in 2014 that states should just be allowed to set their own greenhouse gas targets, with no federal intervention.

Reaction to the Trump administration’s casual relationship with the truth continued apace, with Bard College President Leon Botstein, in a New York Times opinion piece, urging post-secondary institutions to stand up for themselves.

“Not since the era of witch hunts and ‘red baiting’ has the American university faced so great a threat from government,” he writes. “How is the university to function when a president’s administration blurs the distinction between fact and fiction by asserting the existence of ‘alternative facts’? How can the university turn a blind eye to what every historian knows to be a key instrument of modern authoritarian regimes: the capacity to dress falsehood up as truth and reject the fruits of reasoned argument, evidence, and rigorous verification?”

350.org co-founder Bill McKibben, meanwhile, is convinced Americans should be even more afraid of Trump senior advisor and Breitbart News alum Stephen Bannon than they are of climate change.

“The Bannon/Trump administration…has audaciously targeted the main pillars of a civilized nation in a way we’ve rarely seen before,” McKibben writes. “The attack on climate science is, in fact, an attack on science itself, on the enterprise that undergirds modernity.”

If the new U.S. administration pulls the country out of the Paris Agreement, he adds, “it will turn its back on the most painstaking scientific process humans have ever undertaken, a half-century global effort to understand what we’re doing to our atmosphere and what that will do to our future.”