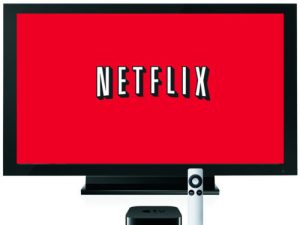 Your next online movie binge will probably carry a heavier carbon footprint than you bargained on. But the online petition site SumOfUs is asking Netflix to do something about it.

“Netflix is addicted to fossil fuels,” SumOfUs declares. “The entertainment giant now accounts for a huge one-third of Internet traffic across North America, but when it comes to clean energy, Netflix is way down the list.”

The latest in Greenpeace’s annual series of green technology report cards shows companies like Apple, Facebook, and Google making good progress toward 100% renewable energy. “But while Apple boasts a clean energy index of 83%, Netflix lags way behind at 17%—earning it a dismal ‘D’ grade.” And that matters, because “a huge amount of energy is needed to stream videos and online music, and store photos in the cloud. If the cloud were a country, it would rank 6th in the world for electricity use!”

SumOfUs says nearly 20 global technology companies have committed to switch their operations to 100% renewable energy. “Netflix is one of the biggest drivers of video-on-demand traffic in the online world,” the petition site notes. “With demand for video streaming set to rise to 80% of all internet traffic by 2020, it’s clear that it’s vital for Netflix to show leadership and embrace clean energy if we’re going to green the Internet.”