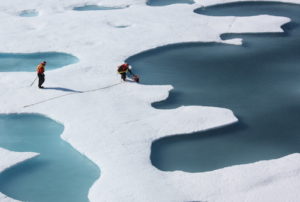 Researchers have come up with a new method to “fingerprint” black carbon through isotope analysis to determine its source, according to a new study published in the Proceedings of the National Academy of Sciences.

The results point to a “very powerful tool” to combat one of the most serious forms of climate pollution, said climate scientist Veerabhadran Ramanathan, director of the Center for Atmospheric Sciences at the Scripps Institution of Oceanography. “It’s a new tool for understanding who is emitting what and when.”

“Black carbon, the soot that darkens the sea ice, causing it to absorb heat from the sun instead of reflecting it, speeds up the rate at which the ice disappears,” InsideClimate News explains. “It’s yet another severe aspect of climate change—except that its lifespan is just days or weeks, as opposed to carbon dioxide’s, which can last a century or more.”

Black carbon can appear thousands of miles away from its source, making it difficult until now to track individual polluters and hold them responsible. That matters because “finding its source and mitigating its effects can have an almost immediate impact,” ICN notes, “and might hold a key for helping slow the rapid melting of the Arctic.”

The study, based on two years of black carbon data from the remote region of eastern Siberia, produced at least one surprise for the research team, said author Patrik Winiger of Stockholm University. “When they began the study, the authors had expected the biggest sources of black carbon would be gas flaring and power plants,” writes ICN’s Sabrina Shankman. “Instead, they saw that vehicles and residential sources were the main offenders, often coming all the way from China, elsewhere in Russia, and Europe.”