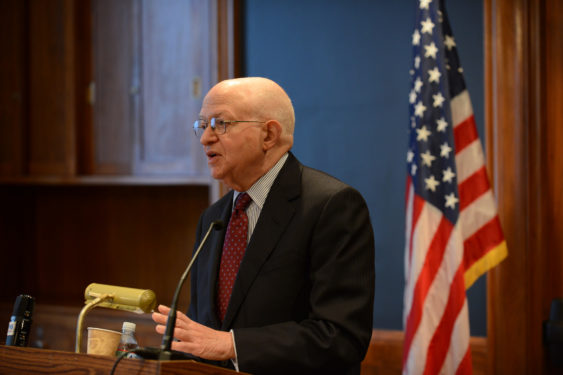 A gradually increasing tax on carbon dioxide emissions, quarterly rebates to the American public, rebates to companies that export to countries with no equivalent carbon regimes, and elimination of regulations made redundant by the carbon tax are the cornerstones of a climate plan released earlier this week by what Time magazine describes as “a group of Republican elder statesmen”.

“Mounting evidence of climate change is growing too strong to ignore,” the Climate Leadership Council writes, in an eight-page plan that hedges on the causes of climate change but still concludes that “the risks associated with future warming are too big to be ignored.”

“For too long, many Republicans have looked the other way, forfeiting the policy initiative to those who favour growth-inhibiting command-and-control regulations, and fostering a needless climate divide between the GOP and the scientific, business, military, religious, civic, and international mainstream,” the Council states. “Now that the Republican Party controls the White House and Congress, it has the opportunity and responsibility to promote a climate plan that showcases the full power of enduring conservative convictions.”

In a New York Times opinion piece, Feldstein, Mankiw, and Leadership Council CEO Ted Halstead say economists broadly support taxes as a solution for pollution. Under a carbon dividend plan, according to a U.S. Treasury Department study, “70% of Americans would come out ahead,” and “some 223 million Americans stand to benefit.”

The three authors note that 64% of Americans are concerned about climate change and 71% want their country to stay in the Paris Agreement. So “if the Republican Party fails to exercise leadership on our climate challenge, they risk a return to heavy-handed regulation when Democrats return to power.”

They also see the opportunity to use climate regulation as a teachable moment for their broader economic ideology. But if Republicans “do nothing other than reverse regulations from the Obama administration, they will squander the opportunity to show the full power of the conservative canon, and its core principles of free markets, limited government, and stewardship.