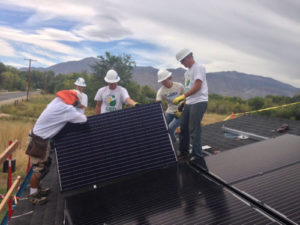 The skies are bright for employment in the United States’ booming solar industry, with the sector creating one in every 50 new jobs across the country last year, according to the latest figures from the Washington-based Solar Foundation.

“U.S. solar industry employment in 2016 grew at the fastest pace in at least seven years with growth in all sectors, including manufacturing, sales, and installations, as demand for clean power swelled,” Bloomberg reports. The Foundation’s figures show that solar accounted for more than a quarter of a million U.S. jobs, up by 25% in a single year, and accounted for 16% of all new employment in the energy, electricity, and fuels sector.

“Solar growth is so extensive and has so much momentum behind it that we’re at the point where you can’t put the genie back in the bottle,” Jeffrey R.S. Brownson, Pennsylvania State solar adoption expert, told the Los Angeles Times.

Citing financial consultants Lazard, the Times notes that “the average lifetime cost for utility-scale wind and solar generation in the U.S. is now cheaper than coal or nuclear and comparable to natural gas, without their federal tax subsidies.”