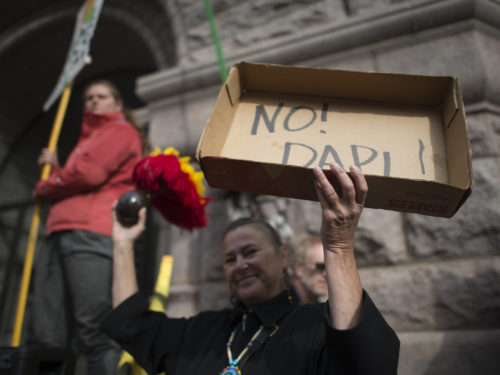 With the new U.S. administration clearing the way for completion of the intensely controversial Dakota Access Pipeline, protests are continuing in multiple forms, with thousands of military veterans organizing in opposition while tribal governments and at least one major city pull their funds away from a DAPL investor.

But the momentum surrounding the months-long protest is nevertheless shifting, with the protest’s original tribal sponsors urging remaining campers to leave, the U.S. government issuing a deadline and sending in Indian Affairs agents to “help clear protesters”, and the line’s developers floating a mid-year date for the completed line to go into service.

After President Donald Trump ordered that a still-pending review of the contested route for the final section the 450,000 barrel-a-day line be expedited, law enforcement agencies arrested more than 70 protesters who were on property owned by the line’s developer, Energy Transfer Partners. Several hundred more remain on land belonging to the Standing Rock Sioux tribe and the U.S. government.

Late last week, the Washington Post reports, “the acting assistant secretary for Indian affairs, Michael S. Black, said the [Bureau of Indian Affairs] had sent ‘enforcement support and would assist’ the tribe ‘in closing the protest camps within the Standing Rock Reservation boundary.’” ABC News reports that “the U.S. Army Corps of Engineers has given protesters until February 22 to leave the campsite.”

It was unclear precisely what form of “assistance” the Bureau was providing, and the tribe denied it had asked for any help. “We do not support or endorse any ‘raids.’ We have not asked for law enforcement to assist in clearing camps, and in fact have repeatedly told them there will be no forcible removal,” the Standing Rock Sioux posted to its Facebook page.

Whatever the Army Corps of Engineers’ permit review concludes, and in whatever manner the standoff ends, Energy Transfer Partners has signalled to customers that it expects to finish the route’s last section—crossing the Missouri River beneath a drinking water reservoir, Lake Oahe—in time to “begin filling” other parts of the US$3.8-billion, 1,900-kilometre pipeline this month. “Around February 15,” JWN Energy reports, citing a “person who asked not to be identified because the plan isn’t public.”

According to Reuters, meanwhile, Energy Transfer Partners shareholder Phillips 66 asserted in an earnings release that “commercial operations [through the DAPL] are expected to begin in the second quarter of 2017.”

Other forms of resistance to the pipeline may continue, however. The Mix reported this week that U.S. veterans who earlier offered to act as human shields against the pipeline’s advance are now crowdfunding hundreds of thousands of dollars to support pipeline resistance “and possibly mobilizing again.”

Meanwhile, a movement is spreading among U.S. tribal governments “to move [their] money out of banks that have invested in the Dakota Access pipeline and help further destabilize the pipeline’s already shaky financing,” notes Resilience.org. That idea has also been taken up by a financial advisory committee in Seattle, which recommended that the city withdraw US$3 billion in investments from DAPL lender Wells Fargo reports attn.com.

Even if this standoff is likely to end much like earlier ones in this part of the United States 150 years ago, North Dakota’s Sioux nonetheless underscored their continuing resistance.

“The Standing Rock Sioux Tribe and our movement as a whole are in a phase of transition and growth,” the community declared on Facebook. “The encampments brought global attention to our struggle, and now we face the task of carrying that momentum forward as we work to defeat this pipeline and other projects that deny the rights of Indigenous people.”