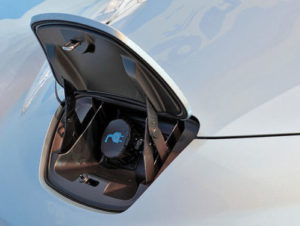 The world’s largest baker and its fourth-richest man are working together to bring a homegrown electric passenger vehicle to the streets of Mexico, where diesel and gasoline exhaust contribute to occasionally acute air pollution.

The goal is “to launch a 100% Mexican electric vehicle in 2018,” Mexico News Daily reports, citing Forbes Mexico. The partners in the venture include Giant Motors, an arm of the sprawling construction and communications empire controlled by financier Carlos Slim, Moldex, an automotive unit of global baker Grupo Bimbo, and Mexico’s premier research centre at the Monterrey Institute of Technology.

Moldex already manufactures electric urban delivery trucks at a plant in the state of Mexico. Giant assembles conventional light- and heavy-duty trucks in partnership with Jianghai Automobile Company (JAC) at a facility in Hidalgo, where the two companies plan to start turning out locally-assembled version of the JAC car later this year.

With the assistance of the institute known as “Mexico’s M.I.T”, Giant Motors and Moldex are now “developing a Mexican electric vehicle that will not only be assembled here, but be designed and customized for the needs of Mexicans with respect to prices and [the nature of its] cities,” said Giant Director Elias Massri.

At first, the new venture will market its electric passenger car to taxi fleets. Zero tailpipe emissions will be a particular selling point in Mexico City, where vehicle exhaust sometimes contributes to air pollution so bad that authorities order millions of private vehicles off the streets.

As Forbes notes, the vehicle is also being brought to market “at a time when the government and private sector are asking to buy national products in the face of the complicated commercial situation between Mexico and the United States”—a reference to U.S. President Trump’s repeated threats to impose hefty tariffs on imports from Mexico.