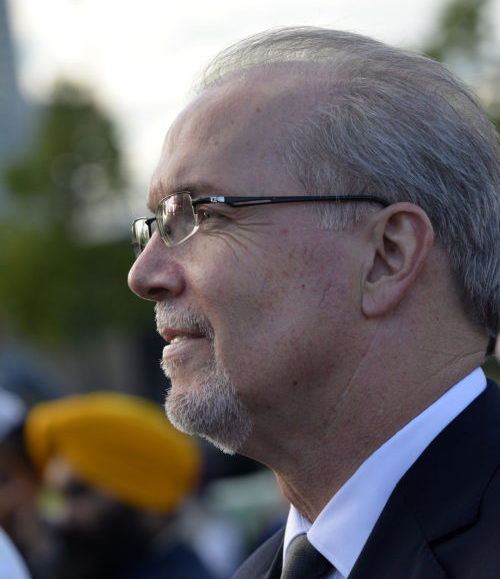 With a provincial election only about three months away, British Columbia’s opposition New Democrats are getting good reviews for a climate change plan that follows advice originally directed to Premier Christy Clark.

The plan, released yesterday by NDP Leader John Horgan, commits to the province’s legislated target of an 80% greenhouse gas emission reduction, from 2007 levels, by 2050. It also calls for an interim target of 40% by 2030.

“Ultimately, climate plans should be judged on one simple test: are your emissions going up, or down?” the 10-page plan states. “Christy Clark has failed to meet this test.”

It promises to replace the province’s current carbon tax freeze with a phased-in pricing plan that is “affordable for families”, takes a sector-by-sector approach to carbon reductions, and treats climate solutions as a platform to create jobs—900,000 new jobs by 2050, according to a Clean Energy Canada study cited in the NDP document.

“This is the future we want to achieve,” it states. “As carbon pollution falls, British Columbia’s GDP and job creation climb.”

“There’s a lot in the documents that show the party is promising to take B.C. in a very different climate direction,” DeSmog Canada reports. The plan is “being praised precisely because it takes up the recommendations of Premier Christy Clark’s own Climate Leadership Team—a group of experts the premier hired to come up with a solid climate plan and then completely ignored.”

“It’s refreshing to see a commitment to reduce B.C.’s emissions,” the Pembina Institute’s B.C. director, Josha MacNab, told DeSmog. “It’s encouraging to see the NDP take up the Climate Leadership Team’s recommendations, because we know those recommendations offer a blueprint to actually meeting those emission reductions.”

B.C. “came out strong” when then-premier Gordon Campbell introduced the province’s original climate plan in 2008, MacNab added. “That’s where we saw a number of productive policies like the carbon tax. But unfortunately, since 2011 and 2012, we haven’t seen any new policies put into place to reduce emissions, and we’ve seen a freeze on the carbon tax.”

Climate Leadership Team member Tzeporah Berman called Clark’s plan a “fake” that was “bought and paid for by oil and gas. It was designed in back rooms, with no consultation, and ignored the recommendations of her own team.” By contrast, DeSmog reports, Berman said she’s “pleased to see the NDP plan relies on concrete steps towards climate action.”

DeSmog had some fun with the B.C. Liberals’ effort to pre-empt Horgan’s release yesterday by leaking the New Democrats’ climate plan about 90 minutes before the scheduled news conference. “Nothing like a little intrigue to spice up your B.C. climate politics, amiright?” writes Editor and Research Director Carol Linnitt. But “in a rather hilarious twist, the very plan the B.C. Liberals leaked is now being praised by climate experts because it promises to actually reduce carbon pollution—something the current provincial government has consistently failed to do.”