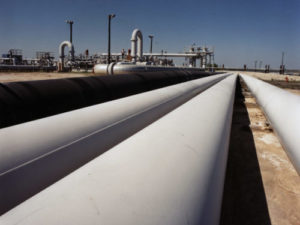 Despite his promises to accelerate U.S. pipeline development, Donald Trump has just had his hands tied (with tiny, tiny rope) after his transition team recast the membership of the Federal Energy Regulatory Commission (FERC) and accidentally left it without a quorum.

“The idea of reshuffling the commission before filling the empty seats originated with the energy transition team, a group close to the utility and oil and gas industries,” the Washington Post reports. “The suggestion travelled up through the administration until it landed on Trump’s desk. Elevating LaFleur required his signature.”

With only two remaining members and three vacancies, FERC has no quorum and can’t hold official meetings. “No quorum means no approvals for contested issues including electric transmission lines, natural gas pipelines, and utility plans,” the Post explains. “Any new member nominated by Trump must go through Senate confirmation, something that could take another four months.”

That reality added urgency to several pending approvals over the last week, the Post and Bloomberg report. “Some of those pipelines have been waiting for a long time, but are still resolving issues,” the Post notes, while pipeline opponents like Senators Ed Markey (D-MA) and Elizabeth Warren (D-MA) were looking to FERC to rescind its authorization of Spectra Energy’s Atlantic Bridge pipeline.

Bloomberg says even a short period of regulatory down time could translate into “costly delays” for companies that can’t get to work without FERC certificates. “For those guys, a month matters,” said Christi Tezak, managing director at Washington-based ClearView Energy Partners.

But even a speedy approval would take 30 to 60 days, and with most of Trump’s cabinet still awaiting Senate confirmation, FERC won’t be at the head of the line.

“If President Trump and [Senate Majority Leader Mitch] McConnell were to meet tomorrow and say this is high priority, I still would expect it’s going to be in the 60-day time frame,” said David Wochner, a partner at the Washington-based law firm K&L Gates. “The Senate will be occupied with more significant votes. The cabinet will be first priority.”

“Given President Trump’s focus on infrastructure and domestic energy resources, we urge him to nominate candidates to fill the commission’s three existing vacancies as soon as possible,” said Don Santa, president and CEO of the Interstate Natural Gas Association of America.