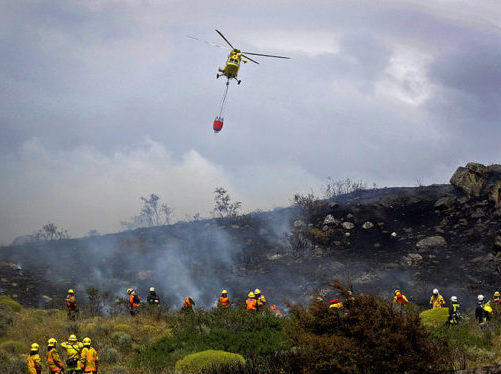 Chile has received an infusion of emergency financial aid, firefighters, and equipment to stem at least 58 wildfires that were burning as of January 30 and had killed 11 people, including four firefighters and the pilot of a single engine air tanker, destroyed more than 1,000 buildings, and burned more than 400,000 hectares.

After a wildfire season that began in November and a bigger crisis over the last two weeks, President Michelle Bachelet said authorities had arrested 43 people suspected of “stoking some of the deadliest forest fires,” the Santiago Times reports. “Most of the suspects were apprehended in the hardest-hit regions of O’Higgins, Maule, and Biobio. They could face a penalty of up to 20 years in prison.”

The paper notes that “fires are common in Chile’s parched forests during the southern hemisphere’s summer. Most are caused by human activity. But this year it has been worse than usual because of a drought attributed by environmentalists to climate change.”

Although fire chiefs blame the blazes in part on monoculture plantations with too few firebreaks, ScienceBlogs points to climate change as a major contributing factor.

“Chile has had a rain deficit for well over a decade, though it has been extra dry for about five years,” writes science communicator Greg Laden. “Drought experts call it a ‘mega-drought.’ Droughts tend to have climate change links, and this one is no exception. A study from just one year ago links anthropogenic climate change to the drought.”

The Times says the international relief effort has “turned into a competition between U.S. and Russia,” with both countries sending firefighting brigades and supertanker aircraft. But meanwhile, despite a proud culture of volunteer firefighting, The Guardian reports that “those on the frontline are struggling to maintain their morale.”

“I get really frustrated because the situation is so extreme there’s often nothing we can do except watch as the flames devour some houses we can’t reach,” said City of Chillan fire brigade chief Gustavo de la Fuente Ortiz. “The plantations have appeared over the last 40 years,” but “it’s much easier to control a fire in a native forest. They’re more humid, and so a fire spreads more slowly.”