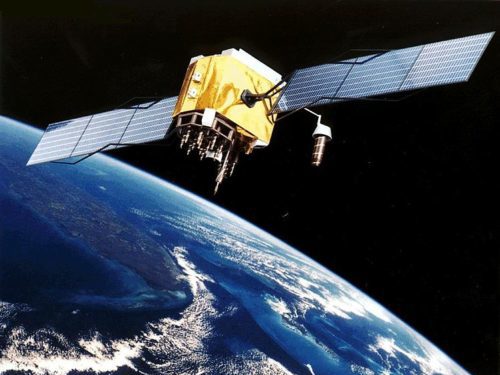 California’s first geostationary satellite, named Moonbeam as an homage to ex-state governor Jerry Brown, rocketed into history January 27—January 27, 2025, that is—and will soon begin sending back “a constant stream of climatology, seismology, and emergency services support data,” The Nearly Now reported last week, in one of a series of faux dispatches from the near future.

With the launch, the first of three on the state’s drawing boards, “California has joined a very exclusive club: governments that own satellites,” writes planetary futurist Alex Steffen.

“These launches are part of a larger state-wide campaign to use ‘best in world’ sensor arrays, data collection, and modelling to provide comprehensive monitoring of the ecological health of the state,” Steffen explains.

Just eight years before the time stamp on Nearly Now’s rather anticipatory report, Brown vowed that California would “launch its own damn satellites” if President Donald Trump made good on his threat to defund NASA climate research. A decade later, Steffen has the state tracing a record of success back to the “California resistance” that emerged during “the darkest days of the Trump years.”

“We fought the Trump regime in the courts and in the streets and at the ballot box. California defended the American way of life, and we have prevailed,” said Gov. Michael Jimenez. “California has spent the last seven years inventing the economy of the future: not just better solar and wind power, cheaper batteries, electric autonomous vehicles, but also the highest green building standards in the world, machine learning for energy efficiency, the new farmtech startups, clean custom manufacturing, better forestry. We’re moving fast,” at a pace “more like tech than 20th century industry.”