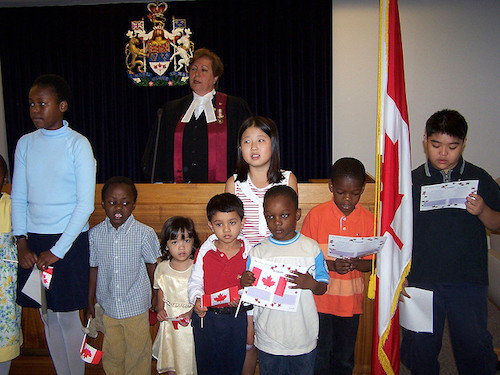 News coverage over the last couple of days suggests the U.S. will lose out on clean energy talent and, more generally, on the “high-skilled newcomers” its economy needs to “compete globally.”

The impending talent drain figured prominently on the Think Progress blog, where veteran climate analyst Joe Romm notes that immigrants accounted for 40% of U.S. Nobel prizes for science since 2000. “But both science and immigration are not only cornerstones of American prosperity and security, they are directly related,” he writes. “America’s leadership in innovation has been built around immigrants and government-backed science. Steve Jobs, the founder of the Apple, America’s largest company, was the son of a Syrian immigrant who would have been banned under Trump’s recent executive order.”

And a similar story played out the last time a major western power seemingly spontaneously took leave of its senses and dismantled its own democracy. “U.S. patents increased by 31% in fields common among Jewish scientists who fled Nazi Germany for America,” according to a 2014 Stanford University study cited by Romm. “Their innovative influence rippled outward for generations, as the émigrés attracted new researchers who then trained other up-and-comers.”

But America’s loss stemming from the Trump executive order late last week will create a gain for other countries. “Canadian technology executives are making plans to capitalize on U.S. President Donald Trump’s immigration orders,” the Globe and Mail reports, “using the new president’s crackdown to help their efforts to recruit skilled workers from overseas.” Universities and government labs also stand to benefit from the brain flight.

“I think it’s really sad and horrible from a political landscape perspective, but very selfishly it’s an incredible opportunity,” said Dennis Pilarinos, a former Microsoft executive now shepherding a 22-person software start-up into existence in Vancouver. “It’s a chance to welcome incredibly talented engineers who might not have otherwise considered roles in Canada.”

The intended application of the U.S. administration’s four-month ban on travellers associated with seven Muslim-majority countries, announced on the weekend, remains unclear, along with the implications for holders of American “green card” residency permits and dual citizens. But many in the U.S. science and tech sector were already expressing alarm.

“Trump has given scientists every reason to feel threatened,” The Guardian noted. Myron Ebell, who led the administration’s transition team for the Environmental Protection Agency, has speculated that two-thirds of its employees should be shed. According to the McClatchy news service, Kenneth Haapala, who leads the team overseeing the transition at the National Oceanic and Atmospheric Administration (NOAA), a leading centre of climate science, was hired from the Heartland Institute, which has made its name holding annual conferences to deny the reality of global warming. New Scientist, well connected throughout the research community, reports that scientists in U.S. public laboratories fear a “witch hunt”.

The fear extends to the university and high tech sectors. Writing in Pacific Standard, Jared Keller warns that U.S. universities and research facilities are at risk of losing the most talented international students, as well as “professors and researchers, vital assets to the research labs and academic institutions.”

The pressure on Silicon Valley and other high tech hubs is poised to rise even further, as Trump aides are reported to be drafting “an executive order aimed at overhauling the work-visa programs [that] technology companies depend on to hire tens of thousands of employees each year.”

Google, Facebook, Microsoft, and other advanced technology companies had already criticized Trump’s weekend order, “saying it violated the country’s principles and risked disrupting its engine of innovation,” Bloomberg notes. An attack on work visas “could strike even closer to home.”

The “foreign work visas were originally established to help U.S. companies recruit from abroad when they couldn’t find qualified local workers,” the news agency explains. “In many cases, the companies are hiring for highly technical positions in the fields of science, technology, engineering, and math, or STEM.” The program has come under fire more recently, however, for granting too many of the limited number of H1-B visas to “outsourcers, primarily from India, who run the technology departments of large corporations with largely imported staff.”

Narrowing the program would be a self-inflicted wound to America’s innovation economy, warned Brookings Institution labour market specialist Gary Burtless. “Immigrant STEM workers have contributed an outsize share to founding new companies, getting patents, and helping build up American companies, which in turn, because of their success, have created tens of thousands, hundreds of thousands of jobs,” Burtless said.

“Discouraging such people from applying for visas to enter the United States to work,” Burtless added, “I can’t imagine how that can be considered to be in the American national interest.”

But if America doesn’t want them, clearly employers in Canada and other U.S. competitors are seizing the opportunity to poach as much talent as they can.

Canada’s technology sector, the Globe notes, “faces a shortage of programmers and other skilled IT professionals which is expected to rise to more than 200,000 by 2020.” The shortage arose, it adds, “as the best talent from foreign countries tends to be more attracted to Silicon Valley than to Canadian tech hubs.”

Trump’s directive may have changed that more or less overnight. While it will “create sheer and utter chaos” for the U.S., “we’ve got an opportunity here to take advantage of it,” Carol Leaman, CEO of a Waterloo, Ontario-based software firm, told the paper.

The president’s executive order is likely to accelerate America’s immigrant brain flight, but it didn’t start it.

“’Just last week,” Vancouver’s Pilarinos told the Globe, “’we had an incredibly talented senior engineer [from a prominent U.S. west coast technology company] who is Muslim and is leaving America for Vancouver because his home and local mosque were recently vandalized. Here’s someone we probably wouldn’t have thought we had a chance [to recruit]. I’m very eager to hire him.”

Early-stage tech investor Janet Bannister told the paper she “has been contacted by Chinese investors who say ‘we want to invest in Canadian tech companies and we’re no longer investing in the U.S.’”

But several factors will determine whether the moment becomes “an inflection point,” as Bannister put it, “when the U.S. closed its borders and people swarmed into Canada” to the benefit of this country’s technology sectors, or a missed opportunity.

Former BlackBerry CEO Jim Balsillie urged the federal government to deliver quickly on a program promised for the spring to make it easier for Canadian companies to fill highly-skilled positions from outside the country. “If Canada can quickly implement the global skills visa for tech talent within an upcoming national innovation strategy,” Balsillie said, “we can reinforce our country as the place to attract the best talent.”

But other countries are already taking note of the same opportunity. “Seeking to capitalize on U.S. President Donald Trump’s controversial new travel restrictions, companies and officials in Asia said they would target greater tourism and education ties with Muslims worried about the curbs,” Reuters reports.

And groups in the United States are also mobilizing in hopes of moderating the damage from the administration’s policy. The American Geophysical Union warned the U.S. president that his “Executive Order could undermine U.S. leadership in science and reduce our access to the best science,” Think Progress notes in a survey of research community resistance.

America’s high tech sector is also organizing to resist the administration’s exclusionary agenda. Representatives of Google, GitHub, Airbnb, and Netflix were among those who planned to meet yesterday to “discuss filing an amicus brief in support of a lawsuit challenging U.S. President Donald Trump’s order restricting immigration from seven Muslim-majority countries,” Reuters reports.