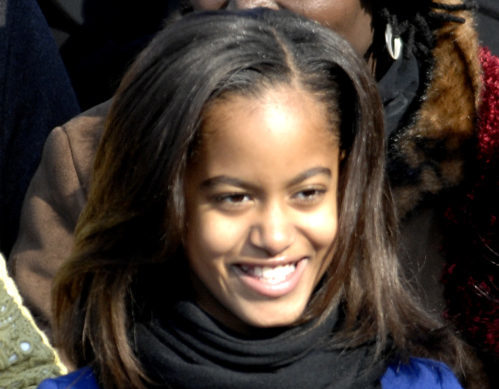 The Obama family may have moved out of the White House. But an appearance by former First Daughter Malia at a demonstration protesting the Dakota Access Pipeline, and an unusual statement from the former POTUS himself, suggest they haven’t walked away from the political conversation in the United States.

Malia Obama was reported to have slipped away from a family vacation in the Caribbean to attend the Sundance Film Festival. There, she was “spotted at a protest against the Dakota Access Pipeline in solidarity with the Standing Rock Sioux tribe,” Grist reported.

The Hill, a Washington political news site, adds more detail. It quotes actress and “fellow protester” Shailene Woodley, who said it was “amazing to see Malia” at the demonstration: “To witness a woman coming into her own outside of her family, and outside of the attachments that this country has on her, but who’s willing to participate in democracy.”

In the waning days of his presidency, Malia Obama’s dad had sought to broker a peaceful resolution to the Dakota Access standoff, declining a final permit for the pipeline to cross under the Missouri River and instructing the U.S. Corps of Engineers to seek an alternate route with the pipeline’s developer. His successor, in an executive order signed last week, directed that the pipeline’s completion be expedited.

The ex-president also broke with the tradition of past office-holders declining to comment on their successors’ policies. Through a spokesperson, Barack Obama said he was “heartened by the level of engagement taking place in communities around the country” in response to the Trump administration’s travel and entry bans on immigrants from some Muslim-majority countries, The Hill’s cross-town rival POLITICO reports.

“With regard to comparisons to President Obama’s foreign policy decisions,” added post-presidency spokesperson Kevin Lewis, “the president fundamentally disagrees with the notion of discriminating against individuals because of their faith or religion.”

Obama had previously said he would only speak out on Trump administration policies if he felt America’s core values were at stake. It took Trump 10 days to cross that line.