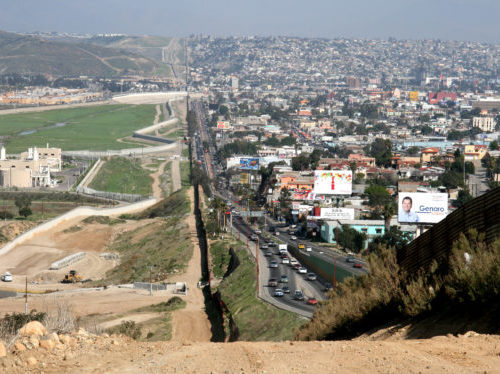 A booming cross-border trade in oil, gas, and refined gasoline complicates the new U.S. administration’s consideration of imposing a 20% border tax on imported goods from Mexico to pay for its promised frontier wall. Canada’s tar sands/oil sands sector might benefit, however.

A border tax would raise the cost of the crude oil that Pemex, Mexico’s national oil company, exports to refineries along the U.S. Gulf Coast. In response, Bloomberg reports, Pemex has been working to reduce its reliance on the American buyers who currently take about 40% of its production—down from nearly 70% in 2014. It has been courting customers in Asia, where many refineries are equipped to handle its relatively heavy crude.

(Those are the same refineries that Canada’s tar sands/oil sands producers will target, if they can complete any of the three proposed pipelines to carry their heavy diluted bitumen to seaports.)

Meanwhile, growing volumes of natural gas and gasoline have been flowing south across the U.S. border, earning profits for the country’s producers that might be threatened by likely Mexican retaliation against a new U.S. levy.

“Pipeline deliveries of [natural gas] from the U.S. have more than doubled in the past two years,” Bloomberg reports, “and Mexico is now tied with Chile as the biggest buyer of tanker shipments of U.S. liquefied natural gas leaving Louisiana’s coast.”

That means American refiners producing gasoline and diesel fuel on the same Gulf Coast “are cashing in on rising fuel demand from Mexico,” Reuters finds,  “shipping record volumes to a southern neighbour that has failed to expand its refining network to supply a fast-growing economy.” Those fuel sales alone are worth about $15 billion a year to U.S.-based refiners. (Protests rattled Mexico at the beginning of the year after the government raised gasoline prices as part of an effort to reduce its subsidies for the fuel.)

If those complications fail to deter the Trump administration from applying its mooted 20% tax on Mexico’s oil exports to the United States, however, American consumers can “expect gasoline prices to rise 30 cents per gallon,” economist Phil Verleger forecast to Bloomberg.