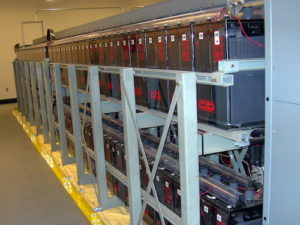 Battery technology companies had excuses to break out the bubbly more than once this week, as massive arrays were inaugurated in three different California locations to buttress the state’s electrical grid after the massive failure of a natural gas storage facility last year. The grid-scale installations by different sets of utilities and battery suppliers were the largest such deployments to date.

Prominent among the companies cutting ribbons was Tesla, which delivered 400 PowerPack battery units that sit on 0.6 hectares near Ontario, CA and “store enough energy to power 2,500 homes for a day or 15,000 homes for four hours,” the Los Angeles Times reports. The battery cells were manufactured at Tesla’s just-opened battery gigafactory in Nevada. Southern California Edison will charge the units with surplus generation overnight, then draw on them during the day when demand peaks.

All three projects were rolled out in less than six months, to reduce the risk of winter electricity blackouts stemming from the massive gas storage loss at Aliso Canyon, near Los Angeles, last year.

Meanwhile, “there’s about to be a surge in larger, grid-scale batteries” in Germany this year, Greentech Media reports. Citing a study by Berlin’s Team Consult, it anticipates “a threefold increase” in installations, “from around 60 MW last year to 200 MW in 2017.”

One factor driving that forecast: the €500 million utilities currently pay German wind operators every year to curtail their generation when it exceeds demand. That money could instead go to store the power for use at other times.