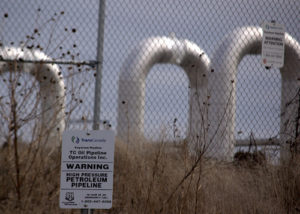 TransCanada Corporation has resubmitted its application for U.S. presidential approval of the controversial Keystone XL pipeline, after Donald Trump issued an executive order last week inviting the company to do exactly that.

“I’ve always thought it was the right thing to do, and I’ve always said, eventually, you know, the right thing happens if you’re patient,” said CEO Russ Girling in a video statement. “We’re really pleased to have this opportunity, and we look forward to working with all stakeholders as we develop this project in the interest of both our countries.”

But the Canadian Press said the price tag attached to the pipeline, previously pegged at US$8 billion, could “change significantly,” particularly in light of Trump’s rumblings that he wanted to “renegotiate some of the terms” of the approval. The “big, big chunk of the profits, or even ownership rights” the former reality TV star and casino mogul might be inclined to demand could add up to a 25% profit share—a proposal TransCanada spokesperson Terry Cunha “said the company would have to see, and have time to review,” to determine its impact on the project, Canadian Press reports.

Beyond that, TransCanada isn’t commenting on the costs Trump’s fulminations might add to the project, but early analysis by the Natural Resources Defense Council might give the company cause to pause.

“How does President Trump get a piece of the action and what would that action look like?” writes Josh Axelrod, policy analyst with NRDC’s Canada Project. “There’s no great way to tell, but considering that TransCanada has an ongoing suit against the U.S. requesting $15 billion in damages (i.e. lost profits) due to President Obama’s rejection of Keystone XL, let’s start there. If President Trump wants 25% of those profits, that’s around $3.8 billion total. So, TransCanada, how about it?

“Their first response the last time he brought this up: ‘Yeah right.’”

Beyond that pressure point, Axelrod points to all the factors that would drive up the project’s cost, at a time when analysts see the possibility of another fossil price crash on the near horizon.

“The Keystone XL pipeline was last projected to cost $8 billion, but that was back in 2014, so the price tag is almost certainly higher today,” Axelrod writes. “Add in a U.S. steel requirement, low oil prices, and slowed production growth in Alberta’s tar sands, and this project is probably a loser for TransCanada anyway. They might talk about how excited they are to work with President Trump to get this pipeline built, but the likelihood of them doing so gets lower by the day.”

While Girling, in an appearance before an investors’ conference last week, said he was confident TransCanada’s original customers for Keystone would still sign contracts for the project, a more recent news service report indicates the company hasn’t yet broached the topic with them.

“Girling said he believes the project remains attractive for shippers, given that it will supply the popular Gulf Coast market,” Reuters reports. “But we haven’t engaged in direct conversation on that issue,” the TransCanada CEO told conference participants. “This wasn’t in our planning horizon in the middle of last year, so we’ve only just re-engaged with our shippers again.”

“Since it was proposed nearly a decade ago, TransCanada has lost some initial support from shippers during its arduous approval process,” the news agency notes, citing a Canadian oil trader familiar with the project. “TransCanada late Wednesday did not immediately respond to a request for comment about the shippers’ commitment to the project.”

But a New York Times analysis of the 830,000-barrel-per-day project notes that “the energy markets are starkly different from what they were eight years ago, when the Obama administration began considering the pipeline.” Then, “the United States was struggling to lift domestic oil supplies and push down prices.” In the years since, “production has rebounded in the United States, and international oil markets are dealing with oversupply. Gasoline at the pump is cheap.”

After reviewing the economic, environmental, political, and business complexities surrounding the project, the Times concludes that “the pipeline still has a long way to go before it can be built.” And even if TransCanada and Trump reach a deal, that result would “surely be challenged in the courts and by vigorous local civil disobedience.”