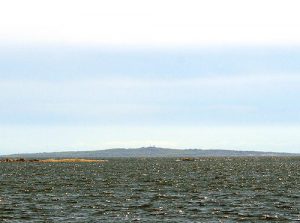 Sweden has had to give up a major offshore wind development in Baltic Sea waters that are now considered a strategic asset in light of mounting tensions with Russia.

The two-gigawatt wind farm proposed by Blekinge Offshore AB “would have been sited five kilometres southeast of Sweden’s island of Hanö,” Renewable Energy World reports. “It had been eight years in the development process, and would have supplied 5% of Sweden’s electricity; 8,000 GWh of electricity annually.”

The project had already been scaled back from 700 to 350 turbines “to accommodate the military needs of the region.”

But then, “the Swedish government decided in December 2016 that this area of sea near Hanö Island now must be reserved for military exercises, given a growing threat from Russia, which has stationed nuclear warships off the coast of Kalingrad, just 200 miles across the Baltic from Hanö,” writes REWorld correspondent Susan Kraemer. “Russia has flown jet fighters through Swedish airspace during training exercises in the Baltic, and Russian submarines have entered Swedish waters, according to the International Business Times.”

“Parliament has made it clear that Sweden’s ambitions are to improve its defence,” said Environment Minister Carolina Forest. “Hanöbukten is one of the strategically most important defence areas Sweden has. The government has considered this issue carefully and concluded that, in this case, it is not possible to combine the defence business with wind turbines.”