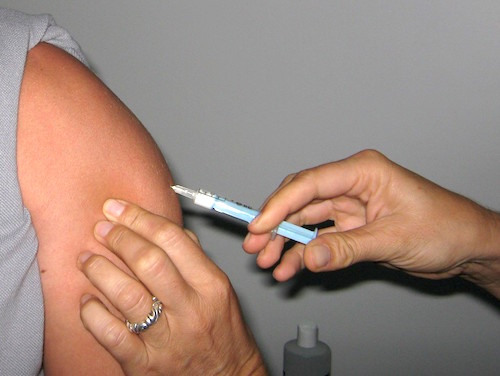 The warning that “some politically motivated groups use misleading tactics” to confuse the public about climate change can help inoculate people against climate change denial, the George Mason Center for Climate Change Communication reports in an article this month in the journal Global Challenges.

“In light of the increasing politicization of (climate) science, and the attempts of vested interest groups to undermine the scientiﬁc consensus on climate change through organized ‘disinformation campaigns,’ identifying ways to effectively engage with the public about the issue across the political spectrum has proven difﬁcult,” write authors Sander van der Linden, Anthony Leiserowitz, Seth Rosenthal, and Ed Maibach. But the new research shows “that it is possible to preemptively protect (‘inoculate’) public attitudes about climate change against real-world misinformation.”

The study divided participants into six groups: A control group, and five others that received different types and sequences of messages about the overwhelming scientific consensus that climate change is real, happening, and caused predominantly by human activity.

But Groups 5 and 6 “first received the consensus message and then a shorter or longer inoculation message before receiving the disinformation message.” The shorter inoculation stated that “some politically motivated groups use misleading tactics to try to convince the public that there is a lot of disagreement among scientists,” while the longer one detailed the dishonesty in an Oregon petition that falsely claimed support from Charles Darwin and members of the Spice Girls.

“As predicted,” George Mason reports, “the inoculation messages protected much (up to two-thirds) of the positive effect of the consensus message.”

While U.S. communicators sort out how to tell the climate story in counterpoint to a federal cabinet composed of climate deniers and fossil industry advocates, Ontario’s Ministry of Environment and Climate Change is honing its message on climate impacts. One of the province’s goals: Bring the benefits home to the nearest “man cave”, reports ClimateWire [subs req’d].

“The agency has released a series of short clips that demonstrate how climate change could affect people’s everyday lives, ranging from reducing the number of trout in Canada’s lakes—‘fewer great fishing stories’—to damaging crops that eventually go into pizza toppings,” writes correspondent Kavya Balaraman. “Flooded basements, officials argue, mean less accessibility to ‘man caves,’ and kids tapped to shovel snowy driveways are going to lose out on pocket money if it doesn’t snow as much anymore.”

The campaign aims to move the needle on findings that 92% of Ontarians are aware of the impacts of climate change, but only 8% say it has affected them personally. “We have seen and felt climate change in Ontario, through ice storms, severe flooding, and millions of dollars in damage to our homes, businesses, roads, and bridges,” said spokesperson Lindsay Davidson. “These losses are not sustainable and demonstrate that the cost of doing nothing is too high.”