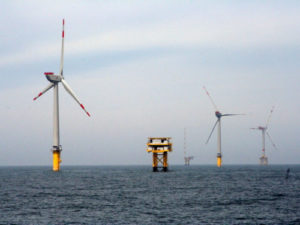 The energy minister in Denmark’s centre-right coalition government is plotting a new outreach strategy before he visits the United States later this year: he’ll be contacting state legislatures to talk about his country’s world-leading wind industry, Bloomberg reports.

“We’re expanding our cooperation with local authorities abroad to include the U.S.,” said Lars Christian Lilleholt, who was recently in India to promote the industry that supplies about 40% of his country’s electricity. He said his U.S. itinerary will include “green states and areas that want to pick up the green gauntlet.”

Denmark, home of global wind giants like Vestas Wind Systems and Dong Energy, is in the process of phasing out subsidies it says the industry no longer needs to compete head-on against fossil fuels. “Building new coal capacity won’t be competitive versus offshore wind,” Lilleholt told Bloomberg. “That’s why the government wants to phase out subsidies for offshore wind. The target is that this has to be competitive and able to stand on its own feet.”

In sharp contrast to what legislators are ever likely to hear from fossil promoters, anywhere, ever, he added: “The prerequisite for a transition to green energy is that the level of [subsidy] support is reduced.”

Vestas earned about 40% of its revenue in the U.S. in 2015, Bloomberg notes, and investors have gone through a couple of waves of panic since Donald Trump’s election as president. Those concerns were allayed recently when Trump’s nominee for treasury secretary, Steve Mnuchin, indicated the country’s Production Tax Credit for wind will continue as planned, rather than being cut back.

“Jacob Pedersen, head of equities at Sydbank, says that’s good news for investors in Vestas,” the news agency reports. “He also warned that it is too early for the offshore wind industry to survive without state support.”