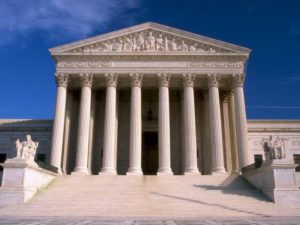 U.S. environmental groups are getting ready for four years of court battles to protect a legacy of climate and energy action under former president Barack Obama.

“For the past eight years, Obama has positioned himself as a global leader in the fight against climate change,” The Verge reports. Now, the country’s biggest green groups are “gearing up to fight any anti-climate action, and attorneys general from several states have vowed to bring the Trump administration to court. That’s where much of the fight over climate change and the environment is going to happen, likely for years to come. It’s hard to predict what the outcomes will be.”

That means the judiciary will “decide the extent to which the Obama legacy is maintained or rolled back,” said Maria Belenky, director of policy and research at Climate Advisers. “The courts are the area of last resort for a lot of environmental groups and a lot of states that have supported the Obama administration’s agenda.”

Obama’s Clean Power Plan will likely be an early focal point, and states are already lining up to defend it in court.

“How the courts will rule is difficult to predict,” The Verge notes. “Trump will be able to nominate a new Supreme Court justice, skewing that court’s balance to the conservative side. If environmental cases are picked up by the Supreme Court, a new composition will matter for the decision.” Belenky sees that as a huge concern, along with the more than 100 judicial vacancies that accumulated in the two years that a Republican Senate routinely obstructed Obama’s nominees.