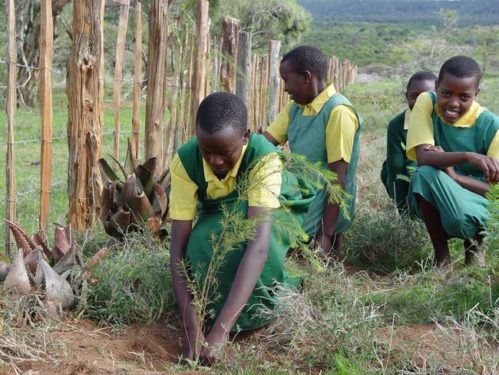 A local energy co-op in the town of Olosho-Oibor, in Kenya’s Rift Valley, is using solar and wind generation to power a range of essential services, keep more money in the community, and keep people healthy and safe.

The off-grid community “is buzzing with solar and wind energy, which powers everything from the dispensary and church to shops, homes, and even a rescue centre for girls fleeing child marriage and the threat of female genital mutilation,” the National Observer reports.

After seeing the success of a small solar installation, enough to power a few homes, residents “banded together to buy the shared energy system themselves, recognizing that the substantial upfront cost would create benefits for years to come. Those now include everything from vaccines that can now be kept cold at the dispensary to solar-powered pumping of water.”

To fund installations that not everyone could afford, those community members who could pay began contributing $10 per month to the project, then approached the UN Industrial Development Organization for technical support. “Today the 125-member energy cooperative has raised $4,900 for panels—installed on poles around the community and on rooftops—and installed two small wind turbines, as well.”

The community occasionally has to rely on a back-up diesel generator—but just occasionally.

“Before we started this solar farm, people from this village used to travel to Ngong town, which is 17 kilometres away, to get basic services and goods such as a photocopy or a haircut,” said solar farm manager Simon Parkesian. “This used to inconvenience us greatly since you had to part with a tidy sum.”

He adds that “the [local] power grid has initiated many projects in the community, but the most important project is the girls’ rescue centre that houses close to 80 vulnerable girls.” The centre opened in 2012 and lights is dormitories and classrooms with renewable energy.

Co-op member Lydia Mboyo said evening lighting gives her children more time to study and allows her to keep her retail shop open later into the evening. She’s planning to expand the business and buy a fridge to store perishable food and drinks.

“I am also a member of a women’s group that makes and sells beaded ornaments abroad, and with lighting we have been able to store our business records in computers,” she said. “We also listen to the radio for entertainment while beading.”