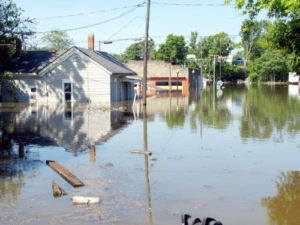 A report released on the last day of Barack Obama’s presidency by the National Oceanic and Atmospheric Administration (NOAA) projects that U.S. cities will see a 25-fold increase in severe flooding events this century as a result of rising oceans.

Some will see that change as early as 2030, all of them no later than 2080. The wildcard: how fast polar ice caps break down.

The report finds that average global sea levels could rise by as much as 2.5 meters (8.2 feet) by 2100. That’s 43 centimeters higher than the same agency’s last estimate, issued in 2012. Even under NOAA’s lowest estimates, the world’s oceans will rise 30 centimetres (one foot) by 2100.

Even at the lowest rate of change, “many coastal cities could see a 25-fold increase in the frequency of damaging floods,” the Washington Post reports. The report’s authors investigated how much sea level rise would cause instances of severe flooding that now take place every 20 years along the U.S. coastline, to occur five times in a single average year.

“An analysis of 90 U.S. cities suggested that such an increase in damaging floods could occur by 2030 in most locations under an intermediate-high sea level rise scenario, and by 2080 under a low scenario,” writes the Post. “In general, it would take just shy of 14 inches of sea level rise for this to happen in any given location.”

Last year, a study published in the journal Nature Climate Change forecast that rising oceans could displace more than 13 million people in the United States by 2100, at a cost of $US14 trillion to relocate them.

The change at the upper extreme of the report’s sea level rise estimates “was partly based on an improved understanding of the physical processes affecting the world’s major ice sheets,” the Post reports. “Increasing instability of the ice sheets in areas like West Antarctica could lead them to collapse in the future.”

And new research based on that better understanding is “suggestive that these higher [sea level] outcomes are more probable than we once thought they were,” said NOAA oceanographer William Sweet, one of the report’s authors.

The NOAA report will be folded into the United States’ next mandated climate assessment, due to be released by the Trump administration in 2018.