From LA to Boston, Paris to Cape Town, Cities Gear Up for Climate Action 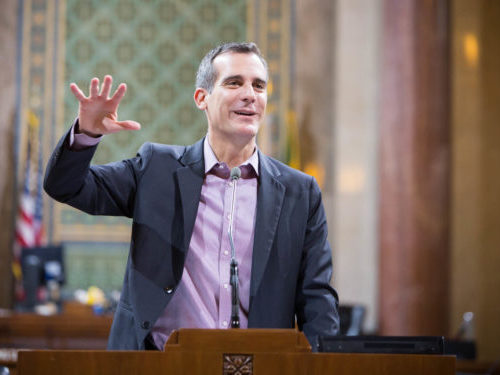 Within minutes of a shocking U.S. election result November 9, cities were stepping up as one of the key bricks in the firewall against Donald Trump’s expected efforts to gut climate action at home and undermine carbon reduction commitments abroad.

With Trump now seated in the White House, America’s municipal leaders are gearing up to protect their own autonomy in an area of activity that is far less partisan at the local level than it has become in Washington, DC. And in a letter this morning in the Financial Times, the mayors of four of the world’s larger cities—Paris, Tokyo, Cape Town, and Sydney, Australia—are affirming their plans to continue transforming their infrastructure to combat climate change, and pointing to the benefits they expect their communities to reap as a result.

In Washington, U.S. the tone was determined during the winter meeting of the U.S. Conference of Mayors. “We’d love a federal partner that can help accelerate [local climate action], but at the very least, just don’t get in our way,” Los Angeles Mayor Eric Garcetti told reporters.

“As city leaders, mayors are familiar with both the consequences and the causes of climate change,” ThinkProgress notes. “Population density and geographic location — the fact that many cities are located along the coast, for instance — make them especially vulnerable to the kinds of extreme weather events and sea level rise fueled by climate change.”

From reducing water imports, to shifting transit from natural gas to electricity, ThinkProgress says there are many areas where a “strong federal ally” could help Los Angeles reduce its carbon footprint. But “the best-case scenario for cities under Trump would be the autonomy to carry out their climate policies unencumbered.”

The concern, though, is that the Trump administration might be hostile enough to city or state action on climate and energy to try and pre-empt their authority to take action on their own. Trump’s nominee for Environmental Protection Agency administrator, Scott Pruitt, fueled those worries during his Senate confirmation hearing last week “when he refused to promise Democratic lawmakers from California and Massachusetts that he would uphold a waiver that allows California to set stricter vehicle emissions standards than the national average,” ThinkProgress reports.

“We will very strongly fight against attempts to roll back California’s independence to chart its own path,” Garcetti said. “In a worst-case scenario, the federal government can take away maybe 20 or 30% of our progress. I’d rather have 100% than 70 or 80%, but I feel like that 70 or 80% of further progress is inevitable based on the leadership that we’ve already had.”

Boston Mayor Marty Walsh agreed, noting that “you’re talking about on the ground where you can actually make a difference, not a policy coming down from Congress. It’s actually something being carried out on the streets of our cities in America.”

In this morning’s Financial Times, meanwhile, Mayor Anne Hidalgo of Paris, Lord Mayor Clover Moore of Sydney, Governor Yuriko Kolke of Tokyo, and Mayor Patricia de Lille of Cape Town say cities and businesses are in the best position to step up.

“The next four years will be crucial in determining if the world can avoid the worst impacts of climate change, keeping the global temperature rise to below 1.5°,” they write. “As America inaugurates a president who has cast doubt on global warming, European leaders [are] distracted by Brexit and the rise of populist movements across the continent, and China adjusts to the prospect of providing global leadership on climate change, it is now cities and businesses that are delivering the boldest ideas and most ambitious plans for a sustainable, low-carbon future.”

The world’s megacities must peak their emissions by 2020 and cut per capita CO2 emissions from more than 5.0 to just under 3.0 tons per capita by 2030, the mayors write—and that will mean a $375-billion investment in infrastructure across 90 of the world’s most important cities. “Fortunately,” they write, “our efforts to tackle climate change also present incredible opportunities. The projects that are set to cut emissions, clean the air that we breathe, and build low-carbon infrastructure will also improve public health, encourage social inclusion, and create jobs.”