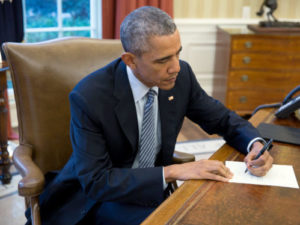 Just three days before leaving the White House, President Barack Obama sent a second installment of US$500 million to the United Nations Green Climate Fund, leaving $2 billion outstanding on the $3 billion the U.S. originally committed to the fund.

There is little prospect that incoming president Donald Trump will make good on the rest of the debt. (Not that he’s been in the habit of making good on his debts.)

More than 100 organizations and more than 100,000 people had urged Obama to transfer the full $2.5 billion to the GCF.

“The Obama administration is refusing to let president-elect Trump’s posse of oil barons and climate deniers dictate how the world responds to the climate crisis,” Tamar Lawrence-Samuel of Corporate Accountability International, which led the campaign, told The Guardian.

“Tens of thousands of people around the world called on President Obama to step up before Trump takes the keys of our government and tries to reverse decades of climate progress,” she added. Even though Obama’s final payment was just an installment, Lawrence-Samuel asserted that “this victory is the climate justice movement’s opening salvo to the Trump presidency. And we’re not going away.”

The Guardian notes that the GCF was a central element of the Paris Agreement. “Established in 2010, it is financed by wealthy countries and used to assist developing countries with adaptation and mitigation. It was widely seen as a key measure to bring both rich and poor countries to the negotiating table.”

At COP 22 in Marrakech, developing country delegates and their supporters were frustrated at the slow pace of climate finance negotiations, particularly as in relation to funding for climate adaptation in the world’s most vulnerable countries and regions.