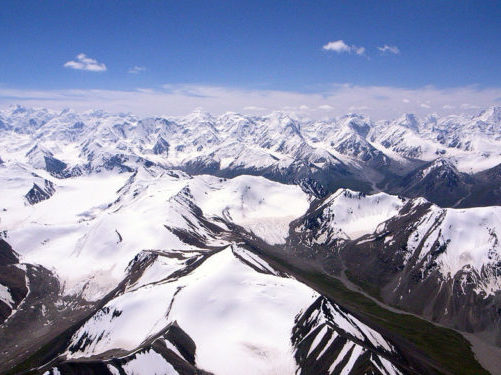 Climate change could trigger regional conflict in Central Asia, as retreating glaciers in the Tianshan range raise the threat of water shortages that will shift “the relationship between countries” in the area, according to a report published earlier this month by the Chinese Academy of Sciences.

“Central Asia is a dry, landlocked hinterland, and Tianshan is the tallest and biggest mountain range,” known as the “water tower” of the region, the South China Morning Post reports.

“About 2,500 kilometres long and up to 350 kilometres wide, the range winds through numerous countries including Uzbekistan, Kyrgyzstan, Kazakhstan, and the Xinjiang region in China,” the paper notes. “Its seasonal snowmelt contributes most of the water for the majority of rivers in Central Asia.”

But now, a research team led by Prof. Chen Yaning of the Xinjiang Institute of Ecology and Geography concludes the range is losing 223 million cubic metres of water storage per year. “This may lead, within just a few decades, to some rivers running out of water in the dry season,” the research team writes.

Since 1960, they say, average temperatures in the region have increased 0.3°C per decade, leading to warmer winters and less snow.

“Some rivers flow through many countries. If supply decreases, some countries might build dams and fights will break out,” said Prof. Hong Bing of the State Key Laboratory of Environmental Geochemistry.

“Other than affecting the relationship of countries in Central Asia, risking regional conflict, the situation could also affect the construction of the Silk Road economic belt, jeopardizing China’s plans to revive trade along the ancient Silk Road,” the SCMP notes.