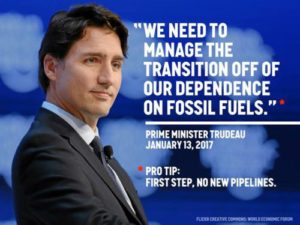 Prime Minister Justin Trudeau injected a dose of reality into the dialogue around Canada’s energy future last Friday, receiving degrees of pushback from Alberta politicians and measured support from climate and energy hawks, with his acknowledgement that the country needs a managed transition out of fossil fuels.

“We can’t shut down the oil sands tomorrow,” Trudeau told a town hall meeting in Peterborough, Ontario. “We need to phase them out, we need to manage the transition off of our dependence on fossil fuels. That is going to take time, and in the meantime, we have to manage that transition.”

While Trudeau has made past references to a transition off fossil fuels, CBC reports this was the first time he had pointed a finger at the Alberta tar sands/oil sands. The reaction from the province was predictably swift.

“This is coming from a prime minister who’s just approved not one but two pipelines that are going to assist in our diversifying the markets to which we sell the product coming from the oil sands,” Premier Rachel Notley told CBC’s The House.

“At the end of the day, this is what I know to be true: the world market for oil is not going anywhere soon,” she added. “So the job of Albertans, and the job of Canadians, is to make sure that that world market looks to the oil sands, as they should, as the first choice for where they get that product from.”

Trudeau’s office followed up later in the day with a statement that captured both sides of the story he’s been trying to tell over the last month. “As a government, we were proud to work with provinces and territories to introduce a price on carbon pollution—to create jobs and protect the environment,” Prime Minister’s Office spokesman Cameron Ahmad told the Globe and Mail in an email. “We are also proud of our recent [pipeline] announcement, which will ensure that we can move Canada’s natural resources to international markets.”

Reaction from the province’s Official Opposition was more inflammatory. “I am sick and tired of people attacking our oil sands,” said Wildrose Leader Brian Jean, who once believed the industry had grown faster than the surrounding community infrastructure could support. “If Mr. Trudeau wants to shut down Alberta’s oil sands, and my hometown, let him be warned: he’ll have to go through me and four million Albertans first.”

Greenpeace Canada climate and energy campaigner Keith Stewart commented that “the transition to clean energy is a global trend driven by the need to protect our kids from climate chaos. Even Stephen Harper signed on to the G7 commitment to phase out fossil fuels, and the only real debate is how fast this will happen.”

Stewart stressed that “no one, including Greenpeace, is saying shut down the oil sands tomorrow. What we are saying is that if Trudeau is serious about his commitments to fight climate change and respect Indigenous rights, then he can’t grant pipeline permits that lock in a massive expansion of oil sands production.”