Oil Train Spectre a ‘Gun to Head’ of Anti-Pipeline Communities 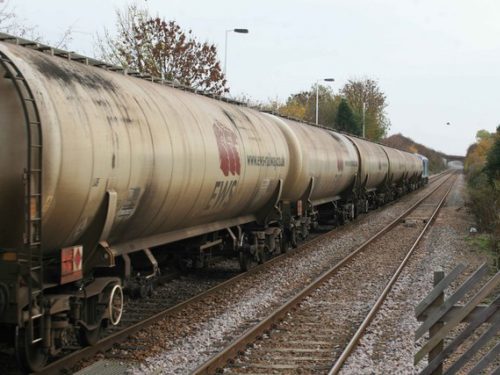 Pressure to accept oil and gas pipelines rather than face the alternative of tanker trains like the one that destroyed downtown Lac-Mégantic, Quebec in 2013 has “been a foundational argument made by the pro-pipeline lobby” that sets up a false binary, DeSmog Canada charges in a recent analysis.

What the site calls the “outrageous” choice between incineration and a despoiled environment “is almost like putting a gun to the head of communities,” commented Patrick DeRochie, manager of Environmental Defence’s climate and energy program. “It’s like saying, ‘well, if we don’t build our pipeline, then we’re going to put more oil-by-rail traffic through your community.’”

In fact, DeSmog notes, oil-by-rail accounts for a tiny fraction of Canadian oil shipments. More expensive for shippers than transporting petroleum products by pipeline, it will likely account for even less if existing permitted pipeline expansions are built.

In September 2016, the most recent month for which the National Energy Board has reported volumes shipped, oil-by-rail exports to the United States were 69,292 barrels per day (bpd), after dipping as low as 43,205 bpd in June. Meanwhile, even existing pipelines are running with 400,000 bpd of spare capacity. If the recently-approved Trans Mountain expansion and Enbridge Line 3 pipeline are actually built, they will add another 900,000 bpd in pipeline capacity to carry crude from Alberta’s and Saskatchewan’s oil and gas regions to U.S. and world markets, assuming those market can be found.

“The only way that oil-by-rail shipments will seriously increase,” DeSmog predicts, “is if Canada continues with its plan to allow for the massive expansion of Alberta’s oilsands in the coming decades, a move that will undermine [efforts] to avoid catastrophic climate change.”

New pipelines “are not about ‘displacing’ oil currently being shipped by rail—there’s simply no evidence for that,” concludes reporter James Wilt. “Instead, new pipelines are about preparing for a massive expansion of the oilsands by almost two million bpd between 2015 and 2040, and weaponizing people’s fears of oil-by-rail to do so.”