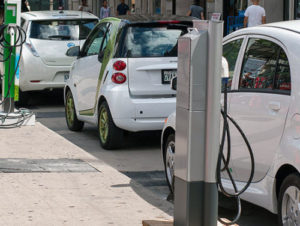 “One of the most dangerous beliefs about the electric vehicle revolution is that it’s in the bag,” he writes. “It’s not.”

Whatever EV development has taken place can be attributed to a patchwork of supportive policies, he says, but the results in Canada have been “underwhelming”: electric vehicles account for 1% of new passenger vehicle sales, against 95% for fossil-powered cars. When Axsen and his team produced a policy report card to track the country’s progress, they ended up with a C- grade—and the conclusion that, on present trends, EVs will only reach 10% market share for new vehicles by 2040.

“What’s the problem?” he asks. “It’s not the quantity of electric vehicle policies—we count almost 100 different initiatives in Canada, two-thirds of which are presently active, with the balance being complete or lapsed. But the majority of these policies will have little to no impact on electric vehicle sales over the long haul.”

A key cause for concern is that 80% of the policies are “demand-focused,” funding consumer incentives or electric vehicle charging networks. “Although politically popular, only a handful of these policies have a significant impact on encouraging electric vehicle sales, and even those are not likely to be in place for more than a few years,” Axsen writes.

By contrast, among the smaller number of “supply-focused” initiatives, he points to Quebec’s recent zero-emissions vehicle mandate as a more effective approach.

“From a policy perspective, the ZEV mandate is a thing of beauty,” he explains. “It sends a clear, long-term signal to automakers and other stakeholders that the electric mobility transition is under way. The policy has already had a transformative impact on electric vehicle sales in California since its birth there in 1990. It has incentivized innovation globally, in part because it has teeth: automakers choosing not to innovate must buy credits from the other companies, or pay fines. In turn, the more innovative companies are rewarded with the revenue from these credits.”

For the federal government, the approach points to a pathway “to cut through myriad and largely ineffective electric vehicle support policies currently in place,” he adds. “A national ZEV mandate could align with Quebec’s and California’s 2025 goals and provide an even stronger market signal by increasing ZEV sales to 40% of market share by 2040.”

With a strong enough supply-side focus, governments might even be able to curtail consumer incentives or other demand-focused programs, Axsen says. “To make the ZEV mandate more politically palatable, governments could enact short-term purchase incentives to help automakers adjust to the initial transition. In addition, governments could introduce a couple years of direct incentives to auto dealerships to help bring them onboard. Continued public investments in public charging stations and revisions to building codes to require vehicle-charging infrastructure would also nicely complement a ZEV mandate.”