Flood and hurricane risk varies widely across US 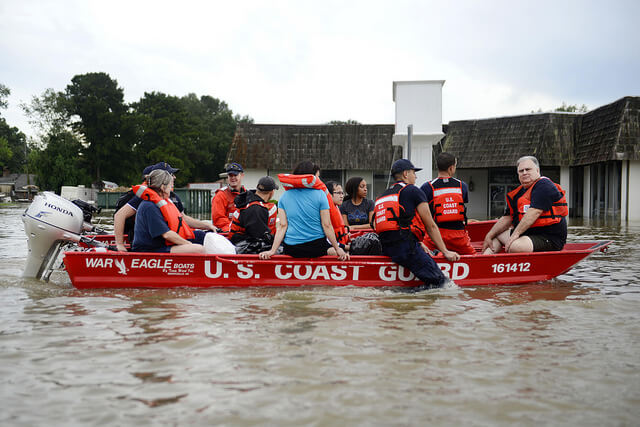 Stranded residents are rescued during severe flooding around Baton Rouge

New evidence based on groundwater and stream flow reveals mixed messages for the United States, as flood and hurricane frequency depends on region.


LONDON, 7 January, 2017 – The northern states of the US can expect more flooding in a warming world. The southern and southwestern states can look forward to fewer floods. And the evidence comes not from climate models or from flood records over the decades, but from down-to-earth measurements of groundwater and stream flow.

There is a mixed message for Americans along the Atlantic coast as well. Atlantic hurricanes will become more frequent and more intense. But the very conditions that favour hurricane intensity could mean that those that hit the coast will be less severe, according to a separate study.

Both studies are about probabilities: catastrophic floods of the kind that hit Missouri, Texas, Oklahoma, West Virginia, Maryland and Louisiana in the winter of 2015-16 could happen again. The rainy north could experience long dry spells.

But the probabilities point to a wetter future for the north, and a less moist one for the south, according to Gabriele Villarini, of the University of Iowa, US, who has been looking at 30 years of data from more than 2,000 US Geological Survey stream gauges and comparing it with readings of groundwater from Nasa’s GRACE or Gravity Recovery and Climate Experiment satellite.

“Generally, flood risk is increasing in the upper half of the US and decreasing in the lower half,” says Dr Villarini. “It’s not a uniform pattern, and we want to understand why we see this difference.”

The finding is consistent: last year Dr Villarini looked at 50 years of data from more than 700 stream gauges in 14 states to confirm that flooding was, indeed, getting worse, even as drought conditions in the southwest were on the increase.

“Greater activity produces more threats, but
at the same time, we increase our protective barrier.
It’s pretty amazing that it happens to work that way”

In a separate study he reported evidence of increasing flooding by those hurricanes and tropical cyclones that crossed the coastline to dump huge quantities of water inland.

But quite how bad future hurricane assault on the US is going to be is the subject of much brow-wrinkling. Hurricanes develop as sea surface temperatures rise. So as global temperatures steadily increase because of human combustion of fossil fuels – and 2016 is seen as the hottest year ever recorded – so does the hazard.

Researchers have found that by any objective standard, the hurricane damage to the US has increased, and all the indications are that the insurance bills will go on rising.

As waters go on warming, more northerly states are increasingly at risk and those unlikely things, the superstorm and the megadrought, will become measurably less unlikely.

But like floods – which are made more probable or more devastating by local conditions, river management, and freak tides and storm surges – hurricanes are capricious.

The circumstances that make hurricanes probable may even set up the conditions that make the same hurricanes weaken as they near land. A new study in Nature sees a pattern even in the caprice.

Jim Kossi of the National Oceanic and Atmospheric Administration’s national centres for environmental information looked at two sets of data gathered over three 23-year periods from 1947 to 2015. The first were observations from the US National Hurricane Centre. The second was a measure of sea surface temperatures and wind shear – changes in speed with altitude – over the same period.

“They have to track through a gauntlet of high shear to reach the coast, and many of them stop intensifying. It is a natural mechanism for killing off hurricanes that threaten the US coast,” Dr Kossin says.

“It is good news. Greater activity produces more threats, but at the same time, we increase our protective barrier. It’s pretty amazing that it happens to work that way.”

The finding is not likely to provide much solace, if only because some think the trend for hurricane frequency and for hurricane damage is rising. Conversely, too, when hurricane activity is low in the Atlantic basin, those hurricanes that do hit the coast could intensify.

And there is another possibility: the relationship between tropical and coastal wind shear conditions may not survive climate change. “There is no reason to think that this is a stationary mechanism,” says Dr Kossin. “It’s entirely possible that changes in climate could affect the natural barrier and thus significantly increase coastal hazard and risk.” – Climate News Network