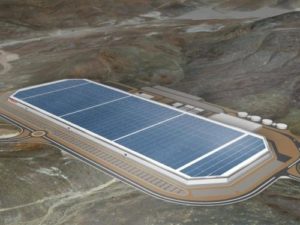 Tesla started mass production this week at its lithium-ion battery Gigafactory near Reno, Nevada, hitting CEO Elon Musk’s promised deadline to open a facility that will be the world’s largest when it is complete in 2018.

“The start of mass production is a huge milestone in Tesla’s quest to electrify transportation, and it brings to America a manufacturing industry—battery cells—that’s long been dominated by China, Japan, and South Korea,” Bloomberg Technology reports. “More than 2,900 people are already working at the 4.9-million-square-foot facility, and more than 4,000 jobs (including temporary construction work) will be added this year through the partnership between Tesla and Panasonic.”

Full-time employment at the plant is expected to hit 6,500 in 2018, the news agency notes. “At a time when President-elect Donald Trump has taken to Twitter to skewer manufacturers for moving jobs to Mexico or China, Tesla stands apart as an all-American carmaker, battery maker, and solar producer,” with plans to manufacture 95% of the components for its Model 3 electric car in the U.S.

The deadline fulfilled carries further significance for Tesla “after missing almost every aggressive product milestone it set for itself over the last decade,” writes Bloomberg correspondent Tom Randall. But “Wednesday marks the third successful target Tesla met for the New Year. The company fulfilled its promise to rapidly complete a massive battery storage project to back up the grid in California; it rolled out promised software upgrades to cars equipped with new Autopilot hardware; and now it’s begun battery cell production at the Gigafactory.”

Greentech Media reports that the Gigafactory opening is “a big deal” for Tesla and its strategic partner, Panasonic. One of the companies’ most immediate challenges is to reduce battery costs for the Model 3, which is expected to ship by the end of this year, by 30%. The Gigafactory will produce a larger battery, jointly designed by the two tech firms, that can store more energy and produce more power, ultimately giving Tesla the same or better vehicle range with fewer battery cells.

In a Wednesday morning announcement that stole attention from the massive Consumer Electronics Show in Las Vegas, Panasonic North America CEO Joseph Taylor said the high-density batteries would go to battery farms first. Greentech says the units have been in production at least since December.

“That these batteries are already in the process of being installed on the grid shows that the companies making them and the utilities using them have a high degree of confidence that these batteries will operate reliably, despite the new form factor,” notes reporter Katie Fehrenbacher. “That could indicate that Tesla and Panasonic have been making these batteries for a while in pilot and test phases.”