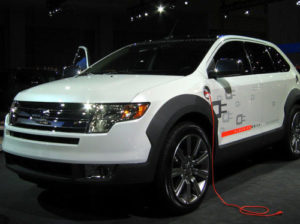 Ford Motors is confirming that its 2020 product line will include an all-electric SUV with a driving range of at least 300 miles on a charge, far above the 115-mile range of its 2017 Focus Electric model.

The vehicle is one of 13 that Ford has on its drawing boards, and is part of a US$4.5-billion investment in electric vehicles, CEO Mark Fields told media Tuesday, just days before the opening of Detroit’s North American International Auto Show.

The new SUV “will arrive in showrooms by 2020, and be built in its plant in Flat Rock, Michigan, which currently builds the Ford Mustang sports car and Lincoln Continental luxury sedan,” CNET Road Show reports. “The facility will receive a $700-million investment in order to produce electrified and autonomous vehicles, and create 700 new jobs in the process.”

The Flat Rock plant will also produce a new Mustang hybrid, expected to hit showrooms in 2020, as well as a new autonomous hybrid vehicle, due to roll out in 2021 for ride-sharing and ride-hailing services.

“Ford is cancelling plans for a new $1.6 billion Mexico assembly plant and will instead invest $700 million at home in Flat Rock,” MLive Michigan reports, citing Fields. “The automaker will build its next-generation Focus at the Hermosillo, Mexico plant to ‘improve company profitability.’”

United Autoworkers Vice President Jimmy Settles said the commitment in Flat Rock is “the equivalent to a new assembly plant.”

Among the seven new vehicle models Ford announced this week, Electrek notes the electric drive train option in its F-150 pickup truck will be designed to “double as an onsite generator.”

And with a major U.S. automaker poised to deliver a wider range of EV options, the U.S. has a roadmap to put the necessary charging infrastructure in place.

Echo Press in Alexandria, Minnesota reports that the Interstate 94 corridor between Detroit and the Minnesota/North Dakota state line “is one of 55 routes the Federal Highway Administration has designated nationally to promote alternative fuels and help drivers find vehicle charging stations.” The charging network, created under the Fixing America’s Surface Transportation (FAST) Act, spans 35 states and 85,000 miles.

“The designation means there is an existing network of public fast-charging stations close enough to one another to reliably travel the corridor with today’s models of electric vehicles,” said Tim Sexton, construction and operations section director with the Minnesota Department of Transportation. (h/t to Midwest Energy News for first pointing us to this story)