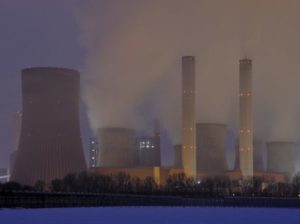 World war may be the only way for U.S. President-elect Donald Trump and his pro-fossil, anti-science cabinet nominees to derail the world’s transition to climate-safe energy, the chair of Carbon Tracker writes in a blog post.

“The target of the Paris Agreement, agreed by every independent nation on the planet in December 2015, is to keep global warming at less than 2˚C,” writes Jeremy Leggett, whose non-profit is dedicated to exposing the carbon risk embedded in financial assets. “If society is to do that, most reserves of fossil fuel will have to stay underground, unburnt. As captains of the fossil fuel industries and their lobbyists prepare to take over the White House, they face evidence breaking out all around them of a fast-moving global energy transition threatening to strand the fossil fuels they seek to boost.”

Leggett notes a Bloomberg report last month that solar is becoming the world’s cheapest form of electricity, a moment the news agency called “a turning point” for world energy. Among “58 emerging market economies—including China, India, and Brazil,” where demand for new capacity is highest on the planet, wind is at the same point.

He notes other milestones as well, including Google’s anticipated achievement of its goal of sourcing 100% of its energy from clean sources before the end of this year. And in the developing world, he observes, “solar lanterns and rooftop photovoltaics are becoming the energy of choice, dooming much coal to be stranded underground in the process.”

For oil, “the positives of [electric vehicles] synergize with the negatives of air pollution to create a perfect storm for diesel. This whole category of oil use will be gone from the global market within ten years.”

The world’s two most populous nations, China and India, are also rapidly abandoning coal. Last month, India’s Central Electricity Authority concluded the country will have no need for new coal-based capacity until 2022. “The Authority now plans for non-hydro renewables to meet 43% of electricity [demand] as soon as 2027,” Leggett writes. “Such an ambition would have been inconceivable until recently.”

Trump will also face resistance from “33 states and the District of Columbia, [which] have cut carbon emissions while expanding their economies since 2000, including some Republican states. Fifteen of the states, led by California, New York, Virginia, Vermont and New Mexico, have already told Trump that if he tries to kill US climate plans, they will see him in court.”

Leggett concludes: “The global energy transition is progressing faster than many people think, and is probably irreversible. Trump’s prospects of resurrecting coal, and giving the oil and gas industry the expansionist dream ticket most of it wants, are very low.

“There is a caveat, of course: that he doesn’t manage to blunder into a world war. All bets would be off then.”