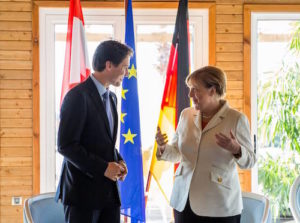 As the incoming Trump administration in the United States promises an open assault on climate and clean energy policy, observers looking for critical leadership in the western economy are calling on Canada and Germany—with the critical addition of the state of California—to form an axis of pro-science, pro-climate resistance.

Outgoing U.S. Vice-President Joe Biden has called on Canadian Prime Minister Justin Trudeau, as well as German Chancellor Angela Merkel, to “step up to the world stage and lead in facing challenges.” Deborah Gordon agrees in the Pacific Standard that “the world needs Canada and Germany now more than ever.

“And climate change is perhaps the foremost challenge. It’s a threat so serious and widespread that it requires solid partnerships, thoughtful leaders, clear rules of the road, and real innovation.”

“But Trudeau and Merkel can’t do it alone,” Gordon adds. “They’ll need California’s help, too.”

Collectively, Germany, Canada, and America’s richest state represent a gross domestic product of US$8.1 trillion and a population of 155 million. “Any policies they develop and any innovations they engender are more likely to be transformational if these governments act together rather than in isolation,” Gordon says. Their top common priority, she added, should be to introduce coordinated, economy-wide pricing on carbon emissions.

Canada has a plan to institute a national floor price on carbon by the beginning of 2018. California—which is emerging as a centre of broad political resistance to the Trump administration—approved a revenue-neutral carbon tax this summer. Germany has plans to implement a carbon price, and has nudged the European Union to do the same. Although its President, Angela Merkel, faces an election with uncertain support.

Nonetheless, Gordon urges “this international triumvirate of climate cohorts [to] collaborate to change the world energy order and safeguard the global climate.”