Tar/Sands Oil Sands ‘Will Never Be the Same’ After Cancelled Projects, Tougher Rules 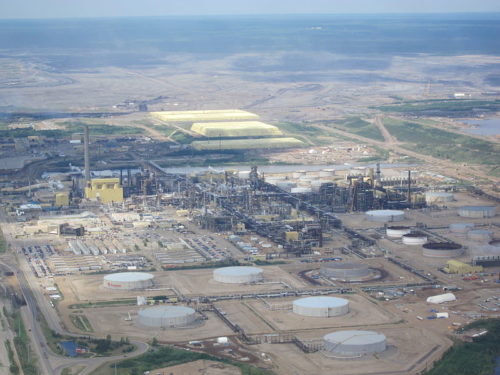 A year of cancelled projects and tougher regulation in 2016 could point to the beginning of the end for Canada’s tar sands/oil sands, according to a year-end review by InsideClimate News.

“It was a dark year for Canada’s tar sands,” ICN reports. “Plunging oil prices caused companies to cancel or delay nearly three dozen projects. Extensive wildfires forced producers to shut down operations for weeks. And after a decade that saw little action on climate change policy, Canadian officials began shaping plans to cap the tar sands’ emissions and set a national price on carbon with an eye to meeting the country’s commitment to the Paris climate agreement.”

The question now, writes correspondent Nicholas Kusnetz, “is whether the downturn is just a blip, or is the start of a trend away from the expensive and carbon-intensive fuel.”

Since the oil price crash began in 2014, Alberta has seen 64 tar sands/oil sands projects delayed or cancelled, and producers have dropped billions from their balance sheets. ICN cites Norway’s Statoil as the latest investor to step away.

“Some economists and advocates have argued that Canada’s oil sands, because of high operating costs and high emissions, should be among the first reserves abandoned as the world phases out fossil fuels,” Kusnetz notes. Counter-trends—including two new pipeline approvals in Canada and the OPEC production cut late last year—mean that “it’s too soon to cue the dirge.” But expectations of a future boom have been tempered on all sides.

The Pembina Institute’s Simon Dyer told ICN “the world is moving on” from tar sands/oil sands projects that aren’t likely to attract new investment unless they can drastically cut emissions. And Kevin Birn, Calgary-based senior director at IHS Markit, said future growth will be limited to more efficient projects. “I’d say there’s increased optimism,” he told Kusnetz, “but the industry will never be like it was.”

ICN points to the Canadian Association of Petroleum Producers and ExxonMobil as two entities that are “more sanguine” about longer-term prospects in the tar sands/oil sands. “Exxon poured billions of dollars into tar sands projects, even after it recognized the climate risks to development as early as 1991. Its website says it expects the resource to provide one-quarter of the Americas’ oil in 2040. And when the company announced its possible reserves reduction, it also said the move would not affect future production, and that it would add back the reserves if oil prices rise.”