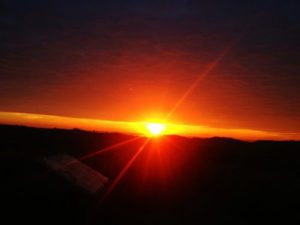 $10 per barrel oil, 1¢ per kilowatt-hour solar, and hydrogen cheap enough to compete with natural gas could be the new reality by 2025, according to Thierry Lepercq, head of research, technology and innovation at French energy company Engie SA.

“The promise of quasi-infinite and free energy is here,” Lepercq told Bloomberg in a year-end interview. “Even if oil demand continues to climb until 2025, its price could drop to $10 if markets anticipate a significant fall in demand.”

And meanwhile, “solar, battery storage, electric and hydrogen vehicles, and connected devices are in a ‘J’ curve,” he added. “Hydrogen is the missing link in a 100% renewable energy system, but technological bricks already exist.”

Correspondent François de Beaupuy notes that Engie, the country’s former state gas company and “now the world’s largest non-state power producer following a decade of acquisitions, is investing in renewables while selling coal-fired plants and exploration assets to shield itself from commodity price swings.” Over the next two years, the company plans to invest €1.5 billion in grid-scale battery storage, hydrogen, mini-grids, and smart buildings.

“In the months to come, we expect to announce the first major steps of projects, investments, partnerships, and potential acquisitions,” said Lepercq, co-founder of Solairedirect, a solar developer that Engie bought for about €200 million in 2015. “We’re talking about technology platforms in which massive value can be created from comparatively small investment.”

Lepercq predicted that solar-generated hydrogen could be cheaper than natural gas within the decade, and solar costs will fall below $1/kWh in the most productive locations before 2025. “We’ll have the possibility to transport energy that’s produced very cheaply in remote places,” he said.

“The key argument being pushed regarding renewables by Lepercq is price—nothing to do with environmental concerns at all,” notes Electrek’s John Fitzgerald Weaver. Meanwhile, “other forms of energy are requesting economic support (coal and nuclear) while we transition away from them toward cheaper sources.”

Over the shorter haul, one analyst is predicting oil prices that could give developers and elected officials exactly the wrong signal about the longer-term prospects for fossil energy. “The founder of a Calgary commodities and trading firm says 2017 should be a good year for recovering oil prices,” CBC reports. “We could even see $100 oil again within the next five years, according to Tim Pickering with Auspice Capital Advisors.”

Pickering’s argument: “Oil doesn’t like to stay stuck for too long,” he told the national broadcaster. “What we’re seeing is a much more positive trajectory for the commodity, and typically when we see that happen, it lasts for some time.”