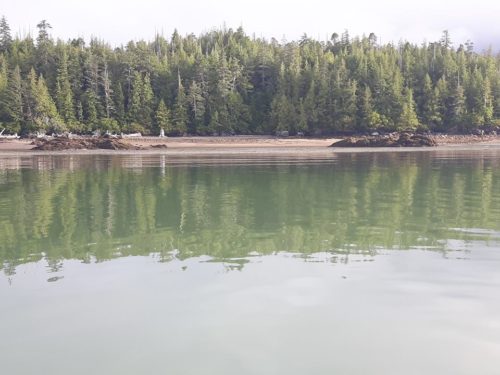 Malaysian state oil and gas company Petronas will likely proceed with its controversial, C$36-billion Pacific NorthWest liquefied natural gas (LNG) project in British Columbia, but is looking to relocate its shipping facilities to Ridley Island in a bid to cut costs and address fierce local opposition to the project.

The final decision is still a couple of months away, but a news report last week strongly suggests the company is focused on how, not whether, to bring the project to completion.

“Such a redesign would eliminate the need for a costly suspension bridge that was part of the original plan and also circumvent an environmentally sensitive marine area that’s been a flashpoint of controversy,” Bloomberg reports. Petronas would still locate its liquefaction plant on Lelu Island, a siting decision that triggered pushback last year from First Nations and environmental campaigners.

“PNW LNG is poised to cause irreparable damage to the second-largest wild salmon run in Canada, and potential catastrophe for the fisheries economy thousands of people depend on,” Lax Kw’alaams Hereditary Chief Don Wesley (Yahaan) wrote last fall, after the project received federal approval, in a joint letter from more than 70 First Nations and environmental leaders.

“Pacific NorthWest LNG is slated to be built on top of an eelgrass bed that supports 88% of the salmon in the Skeena River and all those who rely on them,” said the Wilderness Committee’s Peter McCartney. “It would also produce 11 million tonnes of carbon pollution—single-handedly blowing B.C.’s climate commitments.”

“If this project is built as currently approved, it will be one of the single biggest sources of carbon pollution in the country,” said Clean Energy Canada Executive Director Merran Smith.

The change in project plan would relocate the shipping terminal from Flora Bank, a salmon breeding ground that is a sacred site to local First Nations.

Petronas and its project partners are expected to make a final go/no-go decision on the project early this year, Bloomberg reports. Pacific NorthWest “is conducting a total project review over the coming months,” spokesman Spencer Sproule told the news agency in an e-mail. “During this time, the project is continuing to work with area First Nations, stakeholders, and regulators to manage any potential impacts through mitigation measures and design optimization.”

The redesign would save about C$1.25 billion that Pacific NorthWest had agreed to spend on a 1.6-kilometre suspension bridge, which would have placed marine berths for a Flora Bank facility farther out at sea. The new site on Ridley Island had previously been leased by Canpotex Ltd. for a potash export terminal.