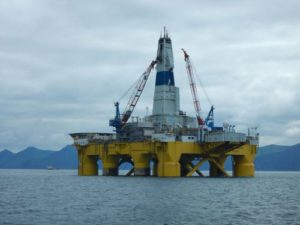 Environmental organizations celebrated a major victory just before the holiday, after Canada and the United States announced a joint moratorium on offshore oil and gas licencing in Arctic waters.

“Today we join the US in announcing measures to ensure a strong, sustainable & viable Arctic economy and ecosystem,” tweeted Prime Minister Justin Trudeau. “A ban on drilling in Arctic waters helps protect the planet we share,” agreed President Barack Obama. “Proud to take this step with @JustinTrudeau & the Arctic communities.”

In Canada, though, the announcement was met with its share of skepticism. Author and University of British Columbia professor Michael Byers said the ban looked like a politically-driven effort to change the channel on the Trudeau government’s recent approval for two new fossil fuel pipelines. The big surprise, he added, was that Canada had announced a five-year review of the ban.

“There’s no activity taking place in the Canadian Arctic right now, so saying ‘No’ doesn’t require anyone to stop,” Byers said. He added that oil prices would have to triple, to more than US$150 per barrel, to make Arctic drilling economically feasible.

But “closing the door to Arctic oil and gas helps [Trudeau] to position himself on the climate change file by saying that there are limits in terms of the development of new oil and gas fields, therefore drawing a line in the sand from a climate change perspective.”

But while Canadian Press maintained that the announcement “prompted a shrugging of shoulders Tuesday from energy industry observers”, DeSmog Blog picked up a rather more extreme reaction in the U.S.

“The only thing more shocking than this reckless, shortsighted, last-minute gift to the extreme environmental agenda is that President Obama had the nerve to claim he is doing Alaska a favour,” said climate-denying U.S. Senator Lisa Murkowski (R-AK), chair of the Senate Energy and Natural Resources Committee.

“President Obama has once again treated the Arctic like a snow globe, ignoring the desires of the people who live, work, and raise a family there. I cannot wait to work with the next administration to reverse this decision.”

“We disagree with this last-minute political rhetoric coming from the Obama administration and contest this decision by the outgoing administration as disingenuous,” added the Independent Petroleum Association of America. “With exactly one month left in office, President Obama chose to succumb to environmental extremists [sic] demands to keep our nation’s affordable and abundant energy supplies away from those who need it the most by keeping them in the ground.”

(Editor’s note: Wherein “affordable” is defined as US$150 per barrel? Or were they maybe thinking of 1¢/kWh solar?)

U.S. environmental organizations pointed to the sites off the U.S. Atlantic and Gulf coasts that are still vulnerable to fossil development.

In Canada, Arctic environment advocates Parvati.org celebrated the announcement as “a huge win for the Arctic Ocean and its inhabitants, and for everyone who believes in a healthy planet,” showing “that when the public demands change, change becomes possible. No one has any business investing in the loss of the polar ice that keeps our planet cool and livable.”

But at Oil Change International’s Toronto office, analyst and campaigner Adam Scott said the announcement pointed to a “crucial” gap between Obama and Trudeau on climate. “The difference between how the White House and the Prime Minister’s Office explained this announcement reveals a major rift between the leaders in their understanding of how to address the climate threat,” Scott wrote.

In his announcement justifying the two pipeline approvals in late November, Trudeau stated “that there isn’t a country in the world that would find billions of barrels of oil and leave it in the ground while there is a market for it,” Scott notes. “But just weeks later, the U.S. did exactly that,” supported by a fact sheet proclaiming that “if lease sales were to occur and production take place, it would be at a time when the scientific realities of climate change dictate that the United States and the international community must be transitioning its energy systems away from fossil fuels.”

“Notably, the joint statement from Obama and Trudeau on their effort to block Arctic drilling mentioned climate but failed to point out this crucial justification for the decision. This points to the fact that Trudeau isn’t aligned with Obama on climate action,” Scott writes. “Prime Minister Trudeau continues to cling to an ideological and dangerous assertion that his government has no responsibility to restrict fossil fuel supply in the middle of a global climate crisis.”