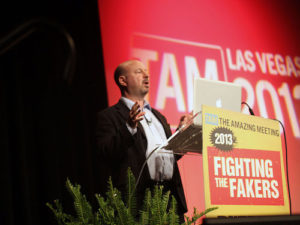 A renowned Penn State University climate scientist who’s received death threats from climate deniers and assorted conspiracy theorists says he and his colleagues are worried about what’s ahead once Donald Trump is sworn as U.S. president January 20.

Mann, director of Penn State’s Earth System Science Center, has “faced hostile investigations by politicians, demands for me to be fired from my job, threats against my life, and even threats against my family” since the late 1990s, and they peaked the last time Republicans controlled all branches of the U.S. government. Now, Trump has famously declared climate change a Chinese-instigated hoax, Mann writes, and “the strong anti-science bent of his advisers is similarly ominous.” He cites Harvard professor Naomi Oreskes’ comment last week to the annual meeting of the American Geophysical Union in San Francisco: “This is a frightening moment,” she said. “We have seen in the last few weeks how the reins of the federal government are being handed over to the fossil fuel industry.”

Mann says he and his colleagues “are afraid that four (possibly eight) years of denial and delay might commit the planet to not just feet, but yards, of sea level rise, massive coastal flooding (made worse by more frequent Katrina and Sandy-like storms), historic deluges, and summer after summer of devastating heat and drought across the country.

He’s particularly worried that younger scientists will be deterred from entering climate science, or any other research area that puts them up against powerful vested interests.

“In all, I’ve been through roughly a dozen investigations prompted by climate change deniers,” Mann writes. “Each time, I’ve been exonerated: Investigators find my methods are sound, my data is replicable, and my lab is run responsibly. But by then, much time has been lost, expense has been incurred, and abuse and vilification has been endured on my part.”

Yet even as a new chill descends, “as someone who has weathered many attacks, I would urge these scientists to have courage,” he concludes. “The fate of the planet hangs in the balance.”