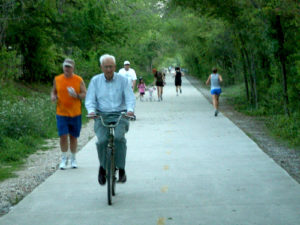 Missouri Governor Jay Nixon has put the finishing touches on the longest rails-to-trails project in the United States, with a 47.5-mile extension to the Katy Trail that creates a continuous hiking and biking path from Kansas City to St. Louis.

“You’ll be able to go 287 miles on an incredible asset,” he told the Kansas City Star during a December 10 ribbon-cutting ceremony.

“The new section of the trail follows the corridor of the old Rock Island Railroad for 47.5 miles from Pleasant Hill to Windsor, where a junction connects to the rest of the Katy Trail State Park,” EcoWatch reports, citing Nixon’s office.

For the vice-president of the Pleasant Hill Chamber of Commerce, the trail is a bridge to smaller communities. “We’re off the beaten path as far as highways go,” Tyler Month told a local radio station, “so this attracts a different group of organizations and individuals to our town that would not have otherwise come here.”

EcoWatch’s Lorraine Chow writes that “the scenic and mostly flat trail follows Lewis and Clark’s path along the Missouri River. The nearly 300-mile, uninterrupted trail features plenty of nature, Missouri River bluffs, and picturesque communities along the way. Horseback riding is also allowed on a 35-mile section of the trail.”