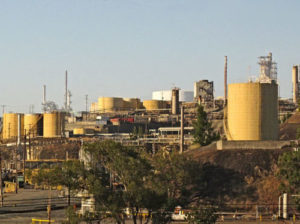 A British Columbia business journal isn’t buying the hype that diluted bitumen from the controversial Trans Mountain pipeline is essential to serve customers in Asia.

Over the shorter term, at least, Business in Vancouver is convinced product is destined for refineries in California, USA.

On her recent promotional tour through B.C., Alberta Premier Rachel Notley said the $6.8-billion project was needed “to open Alberta oil exports to new markets, particularly Asia,” BIV notes. “But critics say the 13 shippers and oil producers that signed take-or-pay contracts (in which a company either takes product from the supplier or pays a penalty) for the pipeline expansion don’t have any customers in Asia yet, and, even if they did, they would get no better price there for their oil.”

At least for now, S&P Global Platts energy analyst Travis Whalen said the biggest new market for Canadian bitumen will be in California, which BIV describes as an isolated region with limited access to pipelines.

“Its refineries, which are set up to process heavy crudes like the kind produced in Alberta, bring oil in by tanker from other countries and by rail from Canada,” the magazine notes. “An expanded Trans Mountain pipeline would allow more oil from Alberta to move to California by tanker, which is much cheaper than rail. And that would raise the price of oil for Alberta producers.”

Over time, up to half of the oil from Trans Mountain could go to Asian refineries, Wood Mackenzie analyst Afolabi Ogunnaike told BIV.

So far, though, Economist Jeff Rubin projects that Canadian product would actually sell for less in Asia than in the U.S. And in contrast to the International Energy Agency, which stubbornly projects global fossil demand growing through 2040, Rubin foresees oil consumption falling 25% over the next 25 years if countries keep their promises under the Paris Agreement.

Economist Robyn Allan, former president and CEO of the Insurance Corporation of British Columbia, agreed that the U.S. pays more for Canadian heavy crude than China.

“Western Canadian Select—the heavy crude produced in Alberta—is discounted not because Canada is a captive customer of the U.S., Allan said, but because it is a lower grade of oil that requires additional refining, which adds to the cost,” Business in Vancouver notes. “She said China pays less for these heavy crudes than the U.S. does.”

“Markets for Canada’s crude oil in Asia do not exist and have not been developed despite serious regulatory and commercial efforts to do so,” she wrote in an economic analysis commissioned by the Tsleil-Waututh Nation.